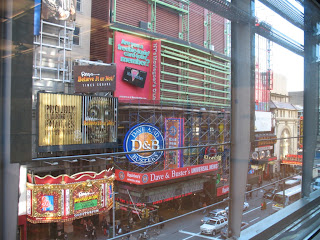 We’re saying goodbye to 42nd Street this afternoon. Going back home for a day to do some laundry and repack for Cincinnati.

Next week will bring the complete aria list for this year’s tour, as well as random reflections from the 200+ auditions we’ve heard so far. (Papagenos, how do you handle miming those panpipes in the suicide scene? Norinas, what about that crazy laugh before the cabaletta?)

I also hope to have a discussion about our experiment this year with callback auditions. If you sang for us this year, and you have comments on our process, please feel free to email me and tell us what you think (link at right). We toyed with several different ways of doing callbacks and finally settled on a same-day scenario. Did it wreak havoc on travel plans? What other reactions did you have?

This comment was posted earlier in the week: Re: sopranos masquerading as mezzos… some of us really are just young and confused! how can you tell in an audition if we’re shirking soprano competition or insecure about high notes, or if we truly are working through it with our teachers? is it ever acceptable to put “zwischenfach” on an application? i personally am teetering on the lyric mezzo-lyric soprano line, but i’m not ready to audition for things as a soprano. does that mean i shouldn’t be auditioning for things at all? if someone has everything you’re looking for, but isn’t quite “fachable” yet, would you still consider hiring them?

Not sure if I can answer this to anyone’s satisfaction in a global fashion, for this is a very individual judgment call. And I’m sure not everyone agrees with me. But here goes.

The sopranos that I believe are legitimately passing for mezzos during the young artist phase of their careers are those who will ultimately mature into bona fide dramatic or spinto voices. There’s a certain heft, depth, and color of sound in the midvoice that is easily mistaken for mezzo color. And once the voice develops and the top is opened up, there’s still an undeniable vocal footprint in the midvoice that has more to do with traditional mezzo “color” than it does with a soprano timbre.

This isn’t the most common scenario, though. More often we hear sopranos whose vocal color and weight are light lyric (or even lighter) singing mezzo material. Remember, this is still rather subjective, but these folks don’t have the kind of midvoice that will carry through any orchestral texture designed to surround a mezzo role. They often have to dip into full raw chest for anything at or below the lower break. And where a traditional mezzo voice begins to gather excitement at the top of the mezzo range, this faux mezzo voice will do nothing but begin to thin. So everything is out of focus.

In response to a few specific questions posed above:

We can’t tell if you’re shirking the competition or in the process of working it out with your teacher. And (sorry, but this is coarse and blunt), on a certain level we don’t care. If you’re putting yourself out there to sing roles (and although we work with emerging artists, we only do it in the context of full roles), you need to have those problems solved.

It’s a little odd to put Zwischenfach on a piece of paper, for you do have to categorize yourself somehow for most purposes. But there’s nothing wrong with explaining that you’re in transition from A to B. Many people do it. Knowing that is very useful, and it really helps fill in some puzzling blanks.

As for whether one should audition during a transition, well, it depends on what you’re auditioning for. There are plenty of programs that can easily handle such a scenario. It’s really between you and the program in question. As I said, it’s a little wonky for us because we assume that the work you’re going to do at Wolf Trap is in the context of a particular role. While there are roles that will accommodate this, they are not plentiful. And it’s a huge risk to take because we have to assume that you’re in relatively stable technical shape, at least enough to sustain a month-long rehearsal and performance period.

By way of Butts in Seats, this illuminating article on Fast Company about incompetent managers. It’s not targeted toward the performing arts field, but it’s spookily relevant nontheless. Among other warning signs of bad managers such as extreme secrecy (something the opera business is good at), over-sensitivity (artists are never accused of this…) and focus on small tasks (always a good way to avoid the big problems), comes the kicker: long hours.

“[Bad Managers] think this is a brand of heroism but it is probably the single biggest hallmark of incompetence. To work effectively, you must prioritize and you must pace yourself. The manager who boasts of late nights, early mornings and no time off cannot manage himself so you’d better not let him manage anyone else.”

Butts in the Seats at first disagrees that this could apply to the arts, then recapitulates. After all, aren’t long hours an unavoidable part of our business? Yes, but we are sadly good at “thriving on martyrdom.” And although I’m clearly not in favor of abandoning responsibilities in a company that has to run around the clock, expecting everyone who desires a career in the arts to forgo any hope of a life outside the theatre or the concert hall is sick. It’s incumbent on us to try to figure out to keep sane and balanced people in our business, not to drive them away.

The Necessary Brevity of Pleasures

Call it a tug-of-war between enough and more
than enough, between sufficiency
and greed, between the stay-at-homers
and globe-trotting see-the-worlders.
Like lovers seeking heaven in excess,
the hopelessly insatiable forget
how passion sharpens appetites
that gross indulgence numbs.

Thanks for replying to my post. I’m only 20 years old, and I think that by the time I’m in the actual Young Artist portion of my career, I’ll be a soprano for sure. I was a lyric mezzo until I was cast as Musetta… and everything changed. It’s too new to audition as a soprano, but my voice feels so good right now that I can’t NOT audition for things. I am glad to know that it’s acceptable to explain that I’m in transition. I certainly will do that. Thanks again!

How come “There are no callback auditions for Studio Artists”? Or there were callbacks?
Thank you.

No callbacks for Studio Artists. Since we’re hearing studio candidates for positions that are usually less specific than those of our Filene Young Artists, we feel that we are able to obtain a good amount of information in a single audition. Up until this year we didn’t even do callbacks for FYA’s.