Before we begin, I must point you to this. Whether you want to be a professional singer or you simply know someone who aspires to such a career, this is required reading. A huge thanks to my friend Nick for his insight and honesty. And if you have opinions of your own, take Yankee Diva’s challenge and tell her “Why?” 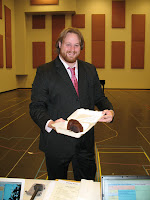 Tenor BG (Wolf Trap Opera ’07) came to today’s audition armed with mood-altering drugs. Chocolate, to be specific. I wouldn’t advise bringing bribes to all of your auditions, but since BG’s lovely wife’s baking skills were legendary last summer, we let him get away with it.

We had a really strong start in Texas today. Houston Grand Opera Studio employs some of the best emerging talent in the business, and it’s no surprise to hear some really fine auditions from those ranks. But there was equally satisfying and promising singing from some of the other Texas-based candidates.

We got here in time to catch Saturday evening’s Ballo at HGO and hear (for me, the first time in person) the amazing Eva Podles. I have few words to describe the sound that came out of her mouth at the top of Ulrica’s scene. What an incredible performer and truly inimitable singer.

It makes me wonder again about these kinds of voices and how they present themselves before they’re mature. What did Ms. Podles sound like at 25? Her fearlessly dramatic and expressive approach would clearly scare us to death were it not present in a mature artist. So, decades earlier, was this voice promising but unwieldly? Or did she begin by using it in a less vivid but safer and cautious fashion? I think I know the answer, but I’m still not entirely sure what to do with it.

No Haydn in the Hotel

I was very excited to check into my favorite audition tour hotel, the Lancaster. I’ve always looked forward to being greeted by the strains of a Haydn quartet or Brahms symphony playing on the radio in my hotel room. I’m not a fan of Muzak, of inescapable background music in public places, but there was always a reassuringly civilized and human quality to being greeted by music in an otherwise anonymous place. But alas, my room was quiet last night when I unlocked the door. I’m told that it’s possible that the hotel is under new management, and undoubtedly the few folks have decided that this touch is either an unnecessary frill or (perhaps worse) an unwelcome enhancement. Hmm.

WTOC Audition Tour, Brought to You by iPhone 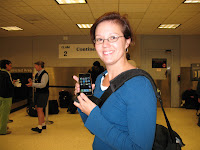 I am surrounded by the damn things. (I only curse because I’m jealous.) Not only do I have the be the only one in the lineup of laptops without a Mac, I’m also surrounded by sleek, beautiful iPhones. Sigh.

LAM poses with her new toy… er, tool… in the airport. By the way, she’s blogging her way through this year’s tour, too – if you want an alternate point of view, head on over to Rahree’s place.

Lucky you. My house smelled like a bakery last summer, as I hosted BG.

That was very amusing yesterday, to see a row of Macbooks and your computer… you’ll join the dark side eventually, I suspect. (Says a true MacBrat – though I do not yet have an iPhone).

It was a pleasure to finally meet you in person!