Click on the link above or go to http://wolftrapopera.blogspot.com/2007/11/2008-audition-tour-aria-frequency-list.html.

The list represents the number of times each aria is listed on this year’s applications. Since singers are allowed to change their rep lists, the actual list of arias heard will vary slightly. (The list of opening arias will be compiled after the tour is over.)

No conclusions drawn at this point – there’s only enough time tonight to compile and post the lists. Over the next few days I’ll compare them with the previous two years’ and look for any trends that might be useful.

If you’re just checking in for the first time in a while, be sure not to miss Josh’s post on casting. (No, Josh isn’t the nerd. Keep reading.)

We’re clearly not done with auditions yet, and the repertoire can and probably will change right up until the last day. There’s often a mistaken notion that auditioning toward the end of the tour is fruitless. Not so. More times than I’d like to remember we have turned on a dime with no time left to spare. It really wrecks Thanksgiving.

Anyway, there are 10 operas on the most-serious-contenders list right now, from which we will choose a specific combination of 3 or 4. (Four if we do a concert staging in addition to our three productions.) Historically I’ve labored over Excel spreadsheets and index cards to figure out what combinations of contender operas are possible. Enough of that, say I. Why allow a teenage geek to live in my house if I can’t take advantage of it? After all, he’ll be in college next year, and I’ll really be out of luck.

So, I say to Bob Fincheimer (his nerd alias), how many different permutations are there in such a scenario, and how can I list them all? Then followed a long lecture on the difference between permutations and combinations, involving terms like binomial expansion and php scripting. And 5 minutes later I was gifted with a script that churned out all possible scenarios. 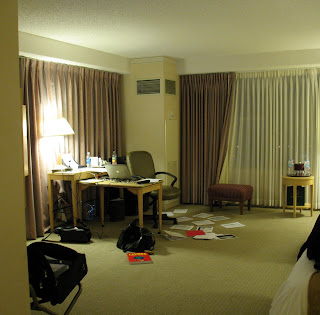 And here we sit in Ohio. In a very large corner hotel room that’s bigger than my first apartment. Figuring out which repertoire groupings rise to the top of the current list.

First day in Cincinnati, in CCM’s lovely Patricia Corbett Theatre. 27 singers, for a total of 54 arias. And here’s the thing that has never happened in on entire day of auditioning: There were absolutely no repeats! 54 different arias! I thought I had died and gone to heaven:)

Damn Those People for Being Healthy and Responsible!

We jam-pack our audition schedule with no breaks, banking on the unfortunate (but usually inevitable…) fact that every day there will be a handful of cancellations due to illness, travel snafus or lack of follow-through. Well, today in Cincinnati, every single appointment was kept. On time, and with bells on. Good for you all! (And shame on us, who had to sprint to the bathroom and back in 90 seconds:)

I loved being next door to The Acting Company’s rehearsals for Moby Dick. I only knew the TAC from their amazing recording of The Cradle Will Rock, and I’m enough of a theater nerd to get a charge out of sharing a rehearsal room wall.

To Panpipe or Not…

Baritones, make a decision about your panpipe miming during Papageno’s “suicide” scene. If you’re going to mime, them do it without apologizing, and mark the music so the pianist knows to watch you and respond accordingly. If you’re not going to mime, then mark the music to indicate your decision. Otherwise, there’s that awkward moment when the pianist doesn’t know whether or not to play the first panpipe entrance or wait for you.

As in “ridere” (laugh, damn you!) – the terrifying stage direction in Norina’s aria. Sopranos, I don’t know how to tell you to achieve this, but figure out a way with which you’re comfortable to handle the sweet yet maniacal laugh that bridges the arietta and the cabaletta. It can be many many things, but the one thing it can’t be is embarrassing to you personally. If you’re self-conscious about it, you’ll spend half the cabaletta recovering.

We require one aria by Mozart or Handel as part of the 4-aria audition repertoire package. Most applicants meet this requirement. We also allow singers to change their repertoire if they bring an updated list to the audition. Unfortunately, too many folks make a change that eliminates the Mozart/Handel requirement. Don’t.

More news from Ohio in a day or two.

I know you do a lot of things on the computer, and you just spoke about the script that works things out magically… courtesy of your nerd. ;-)

But sometimes paper just can’t replace the electronic… have you ever heard of Circa notebooks from Levenger? They allow you to ‘rip’ a page out and ‘put’ it back in. And they have index cards that do that!

Is there something wrong with the NYC (FYA) link or is it suppossed to be connected to the Cincinatti dates as well?

I think I fixed the link. Weird blog gremlins or something. Thanks.