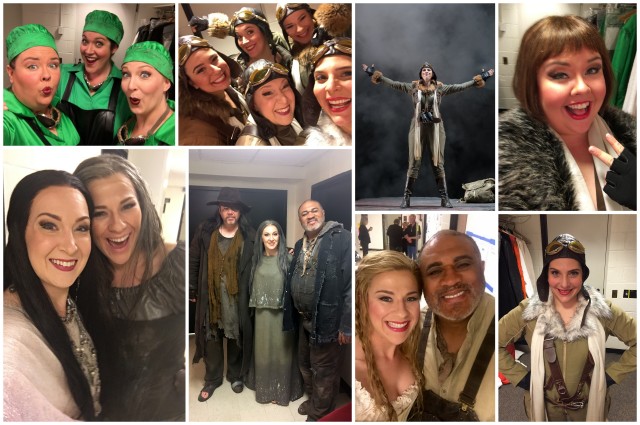 On the eve of the third and final cycle of #RingDC, I want to thank WNO for bringing this singular opera experience to DC-area audiences, and I’m so proud that 13 former Trappers are singing 19 different roles in the production. Their Wolf Trap Opera experiences span the length of my own career – from Gordon Hawkins (with whom I shared my first ever WTO season) to Kerriann Otaño (who just arrived at Wolf Trap today to begin rehearsals for The Rape of Lucretia.)  Scroll down for the complete list.

Our wonderful connection with WNO’s Ring doesn’t end there. Projections Designer S. Katy Tucker will be back at the Trap in August for our Boheme; Assistant Conductors Robert Mollicone, Ken Weiss, Michael Baitzer, Justina Lee, and Stephanie Rhodes have been (and some still are) WTO Music Staff members; Assistant Directors Andrea Dorf McGray and Amanda Consol are former WTO Directing Interns; Associate Director Laurie Feldman directed our Falstaff at the Filene Center 20 years ago; Stage Manager Jill Krynicki is a former WTO intern and ASM; Assistant Stage Manager Sean Corcoran has been a WTO PSM and ASM; Supertitles Coordinator Corinne Hayes is a former intern; and (last but of course not least), Francesca Zambello and I collaborated at Wolf Trap many years ago (I was a pianist on a show she directed.)

Trappers in the Ring

Twilight of the Gods

Toi toi toi and hojotoho to all!

I loved seeing all the alum credits. Congratulations, Kim.

I’m an alum, too!!! Directed Falstaff back in the dark ages with Stephanie Blythe, Scott Hendricks, John Osborn….and a host of other great artists!!!

Me too! ’96 SM Intern and ’98 ASM Abduction from the Seraglio. Other Trappers on the Ring are ASM Sean Corcoran, and Supertitles Corinne Hayes, We’re everywhere :-)

I should’ve known that wasn’t all, Jill! Post has been corrected and updated :)

I had not looked at this before my email to the Wash Post and I missed Daryl Freedman (her WTO mention was in the middle of her bio). Nothing from the Post yet – will adjust if I do hear

Fabulous Ring!!! Such a privilege to see & hear it.
Hats off to WTO!
Many thanks,