This past week, members of the Wolf Trap Opera Studio took their fabulous Instant Opera! improvised opera to hundreds of children in the magical part of Wolf Trap National Park called the Children’s Theatre-in-the-Woods.  Five years ago, I was onstage with the singers, developing this incredible project with Jim Doyle (of Comedy Sportz, and now of Disney).  This year I was alternately on the road, then managing orchestra readings, so I missed all of the fun.  Still can’t believe it. 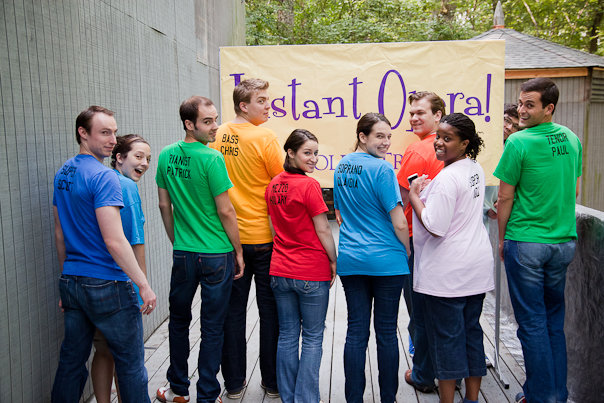 You can read more about how Instant Opera! works here.  And for your enjoyment, here are a few Mad Libs-style opera plots that the children created during Instant Opera! 2010:

Star Wars Lizard
Once upon a time in a backyard, Darth Vader and Yoda were doing yoga.
Along came Zeus and a cheetah, and they danced!

The Secret Castle
Once upon a time in a castle, a princess and a dragon were dancing.
Along came a King and a salesperson, and they cooked dinner.

Wolf Trap Superstars
Once upon a time in a forest, Justin Bieber and Hannah Montana were cutting down trees.  Along came Harry Potter and Hermione G, and they did some magic!

SpongeBob in a Castle
Once upon a time in a castle, a prince and a pig were eating lunch.
Along came a princess and SpongeBob, and they danced!

Thanks and congratulations to Claudia, Hillary, Paul, Hunter, Christopher, Patrick, Scott, Judy, Amelia, and of course, your friend and mine Jim Doyle.

(Wish I had photos, but I didn’t get to attend a single show, and someone let Melear move to Europe with his camera…)

UPDATE: Just snarfed the photo above from CameraMan’s FB page :)