Words to live by. If you’ve studied improvisation, you will recognize this basic building block. Just accept whatever is thrown at you – by your stage partner, your family, your job, the gods – then say “Yes. And…”

For some people the challenge is “Yes.” As someone who never learned to say “No”, I find the first part of this equation excruciatingly simple. I say “Yes” with no provocation. A serious character flaw. For me, the revelation is “And”… the power to write the next chapter myself. What a gift!

I digress. We’re getting ready to make up operas in the woods for hundreds of children. The toughest audience of all. But the most important. A couple of days ago I received an unsolicited letter from a parent who attended last year’s Instant Opera! performances with her son. It was one of the most important messages I’ve ever received from a patron. 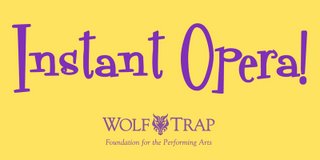 Exactly What Is Instant Opera!?

If you come to the Children’s Theatre-in-the-Woods this week, you’ll see. If you don’t live near Wolf Trap, and you’re curious about how this works, read on.

Each one of our four singers introduces her/himself, gives examples of the kinds of characters s/he plays in operas, then offers up two contrasting aria excerpts (about 20 seconds each, in original language). The kids get to vote for which one of the two arias (the “happy” one, the “mad” one, the “sad” one, etc.) they want to hear in their opera.

During the introductions, the singers introduce the audience to some basic opera concepts – bravo/brava/bravi, an aria is the same as a song, and opera often isn’t sung in English (but that’s OK!). We even place a fast food order using recitative.

Using a Mad Libs format, the cast takes story ideas from the audience.

The audience then votes on a “happy” or “sad” ending, and the cast gets 3 minutes offstage to come up with a game plan. During their deliberations, I take the stage to get suggestions for a title for the opera, play two overture samples for the audience to choose from, and lead a silly audience participation game involving violins, trumpets, and timpani.

After the abbreviated chosen overture, we launch into recitative. The cast makes up the story and delivers it via recitative. I accompany them on the piano, and we try to stay in the same key as we wander through the circle of fifths. Whenever I sense an aria coming on, I launch into the introduction. With any luck, I’ve guessed correctly.

The aria excerpts (about a minute each) are sung in original language, and are used as placeholders and magnifiers for emotions and situations. The arias are sung in original language, and the actual text doesn’t usually apply to our new opera. But it’s a great exercise in plumbing the infinite spectrum of expression available in a single aria, and the kids respond directly to the emotional content of the music.

Somehow, in about 20 minutes, we get to the end of the prescribed Mad Lib story, each one of the four singers has worked in his/her aria, and we top it all off with a finale (“happy” = Traviata brindisi: “sad” = Butterfly Humming Chorus.)

I have no idea how this actually works, but it does.

Happy Independence Day. Look for a report from the woods on Wednesday!