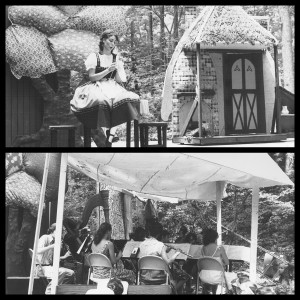 The Company returned to the Children’s Theatre-in-the-Woods in ’81 with two terrific vehicles – Ravel’s L’enfant et les sortileges and Brooks’ Rapunzel. I find it amazing and charming that these TITW operas in the early days were done with orchestra!

There’s a missing piece of the puzzle in 1981 – there are references to a production of Britten’s Rape of Lucretia at George Mason University, but there’s no backup paperwork and no copy of a performance program.

Something critical to the future of the WTOC was taking shape in 1981. The Barns – the charming indoor chamber theatre that would be our main home for the next 30 years – was being moved from upstate New York and reassembled in Vienna, Virginia. Looks as if the Britten Lucretia was scheduled to be the first WTOC production at The Barns in August. No telling what happened, but I’m guessing that construction didn’t finish on time, and the show was moved to GMU at the last minute. The Barns opened on October 4, 1981 and has operated continuously since. Guess it was a little ambitious to try to open the theatre with an opera production :)