At a casual glance, Wolf Trap Opera seems to have continued its normal operations in 1978. There were two opera productions at the Filene Center: The Gondoliers and a world premiere of The Duchess of Malfi – a new opera by Stephen Douglas Burton.  The 1970’s era general template was in place – guest artists in starring roles, with young artists filling out the cast. But the 1978 season young artists weren’t chosen during an annual audition process; rather they were hand-picked for a repeat engagement from the list of participants from recent seasons. These singers included Neil Rosenshein, Janice Hall, Faith Esham, Elaine Bonazzi, Maryanne Telese, and Jake Gardner. 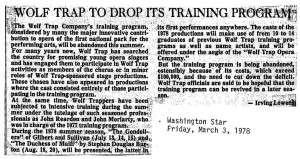 The Washington Star (at right) reported that the training program was being “abandoned,” but we now know that it was (thankfully) on temporary hiatus.