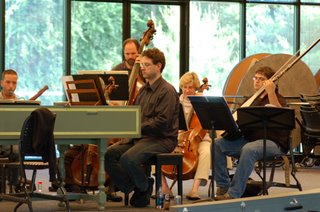 This afternoon brought the first orchestra rehearsal, held next door in the rehearsal room because the production team is in the theatre setting lighting cues. After spending last evening listening to the 120-player NSO (see below), I feared that my return to the baroque would be disappointing. Not so. Beautiful colors. Strings, recorders, oboe, bassoon, lute, harpsichord. 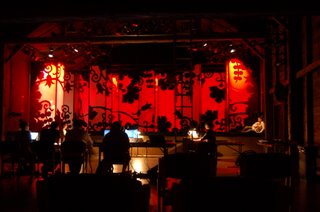 In the theatre tonight for the first technical rehearsal – “piano tech” – working on scenic and lighting issues. It’s called piano tech because the orchestra isn’t here yet, and the score is played on piano. Well, in our case, on two digital keyboards making various sounds; piano, harpsichord, lute, and organ.

(Snapshots are of tech rehearsal, as seen from my perch at the back of the theatre:)

Got to the Kennedy Center early last evening for the Mahler Eighth extravanganza. (Can’t risk being late for a show with no intermission.) Spent a few idle moments playing “Mahler or Mame?” – observing patrons walking toward the Grand Foyer and guessing whether they would turn right and head toward the Eisenhower Theatre for Mame! or left for the NSO’s Mahler Eighth. As you might suspect, it’s not hard to guess.

The Mahler was a magnificent experience. I know I’m supposed to think it’s too vulgar and garish for discerning ears. But once I got over the anxiety produced by its technical demands (choruses miles away from the conductor, soloists upstage of the orchestra, etc… just had to remember that they’re not my problems!), I adored it. 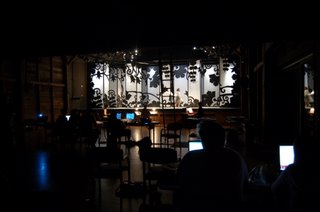