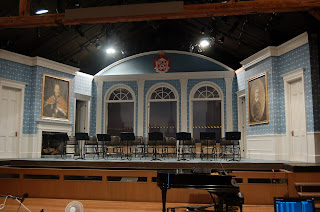 I’m not a superstitious woman.

Therefore, I am saying out loud that this path to King for a Day has been blessedly and somewhat surprisingly devoid of drama. A handful of minor challenges (crazy allergies, a heat wave that has stressed out the old AC unit), but far fewer than we had any right to expect.

About a year ago I read an article about marriage counseling in The New York Times. A therapist said that one of her jobs is ‘titrating anxiety’ – challenging people enough so that they’ll feel the pressure to grow and change but not so much as to send them spinning off in alarm. I reread that sentence a hundred times because it so perfectly articulates the job of producer. And tech week (those few days leading up to opening night) is usually consumed with the task of titrating anxiety. (The scientific analogy* isn’t exact, but in a right-brain sort of way, it’s just the right image.)

I know we have 3 more days to traverse before King for a Day opens, and I’m sure there are those of you who are shaking your heads right now, knowing that I’ve jinxed it. I live to prove you wrong. I give thanks for the occasional gift as readily as I complain when the road is hard.

Besides, this music just makes me happy. A little bit of Barber with a tinge of Tell, dollops of Daughter, and the occasional random glimpse of characters who will become people like Alice, Elvira, Alfredo and Falstaff. 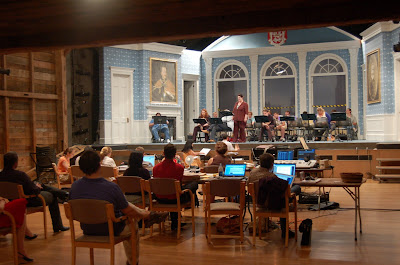 Tonight, the Sitzprobe. We’ve been on the stage, working out technical elements of props, sets, costumes. Now we sit (literally), and revel in the magic of the music.

*Titration: determination of what materials are present in a sample by adding precise amounts of known chemicals and observing the reaction. 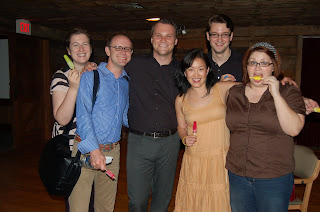 (I’m not sure that chemical reactions have anything to do with frozen popsicles, but they sure were fun. Thanks, KM.)