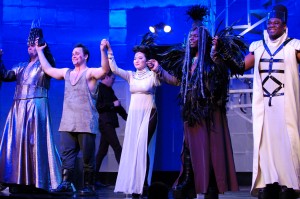 Each of our four Zaide audiences chose their own ending to Mozart’s unfinished opera.

For the statisticians out there, overall voter turnout was 90%.  And of the three available endings, audiences chose:

It seems that the weekend audiences preferred happy endings with their opera.  The opening night crowd was more adventurous than the others.  And the Tuesday night audience (who fought their way here through a nasty rush hour and sold-out traffic for the Harry Connick show down the road) -well, let’s just say they were a little more bloodthirsty.

There are many real things here to be learned about audience engagement, but I don’t really know what they all are.  Suffice to say that this little experiment bore far more fruit than we ever expected when we backed into it.

Thanks to all who came along for the ride. with a special shout-out to Club 66 at Wolf Trap, members of which attended the closing night show with young professionals from Washington National Opera’s Generation O.