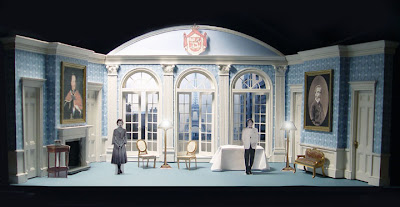 I am a Marquise. Although you might think that being of noble birth gives me an advantage in life, I can assure you that I’ve had quite enough of it.

My cousin and I are cooped up here in this stuffy old house in Paris when all of life is swirling around outside. For heaven’s sake, it’s 1953… the middle of the 20th century! It’s just like this

wonderful new movie called Roman Holiday, where Audrey Hepburn plays a young woman who spends her whole young life missing out on all of the excitement in the world outside… Of course, we can hardly escape this house to go to a movie theatre, so we’ll never know.

I have a lover. His name is Chevalier Belfiore, and you should see how gorgeous he is in his uniform. But he’s been strangely absent lately, and I’m not at all happy about it.

My cousin is in love with a dashing young man named Edoardo. But my uncle is determined to marry us off to two of his old cronies. I’m stuck with some stuffy Count, and my cousin gets the penny-pinching head of the Treasury. (To add insult to injury, the Treasurer is her boyfriend’s uncle…)

We’ve been trying to escape our fates, but now there’s a double wedding scheduled for this weekend. I need a plan, and now it seems I’ve had quite a stroke of luck.

My adorable Belfiore has been strangely absent lately, and now I know why. He just showed up here in this house, pretending to be the King of Poland. (I’m sure there’s a good reason behind all of this, and I’m determined to find it out later.) Just to toy with him, I’ll pretend to want to marry the old Count just to see if I can get him to give up his disguise. But first, I have to convince him to use his power as the “King” to help my cousin get away from the old Treasurer fellow.

The Marquise is a pivotal character in King for a Day, and we’re several days into rehearsal now, telling her story through some lucious Verdian melodies and ensembles. More about the music in this weekend’s post, but first, a few words about the production.

When I taught a recent opera intro class for Wolf Trap’s adult education series, we had lively discussions about “updates” – placing operas in more recent time periods. It doesn’t take much to imagine that this topic generates all sorts of impassioned opinions.

I’ve seen my share of controversial stagings, and I’m not saying that moving an opera from its original time period is automatically a good thing. But first, consider this. What exactly is a “period” production? In this case, should we wear costumes from the early 1700’s, when the real King Stanislaus of Poland lived? Or use dresses and furniture from Verdi’s time?

Productions of La traviata in the late 1900’s were backdated to the 17th and 18th centuries because the subject material was too controversial to clothe in contemporary dress. The setting of Ballo was moved from Sweden to Massachusetts to avoid political discomfort. If, in Verdi’s time, it was acceptable to play fast and loose with time period and geography in order to distance the subject material, might it not now be palatable to put a story in a time and place that make it come alive for us?

Not to belabor this, truly, because this particular “update” is both gentle and genteel. A bunch of stuffy old ex-pats living in the shadow of the Eiffel Tower in the 1950’s provide the perfect environment for this story. The analog is a strong one. It clarifies and heightens the story, and the stakes are equivalent in either environment. In both places family duty trumps youthful desire, and military titles and blue-blood lineage are naturally overinflated.