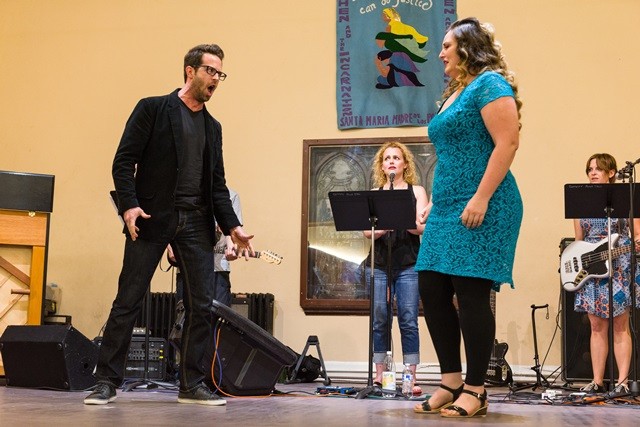 When we started looking at Britten’s The Rape of Lucretia in earnest last fall, we knew that we weren’t going to be able to produce it without comment, the way we had in 1988. And, quite honestly, the piece is so rich in timely themes and strong artistic associations that the thought of exploring the story was pretty exciting from a programmatic level.

Art allows us entry into difficult subjects. It forces us to confront and live with ambiguity. Britten gave us an opportunity to explore some big concepts and themes. We wanted to dig in deeply, to provide context to the artists and patrons alike. We were lucky, in that there are many people and organizations that generously joined us in this exploration.

On June 1, the McLean Project for the Arts hosted See Lucretia, a lecture by Dr. Alexandra Libby, a curator from the National Gallery of Art who specializes in Flemish masterworks. She spoke of ancient Etruscan pottery, and delved deeply into Rembrandt’s famous painting, which captures the moment immediately preceding Lucretia’s suicide. In a related gesture, the George Mason University Art Department held a call for artwork on the topic, and Allison Gong and Savannah Loebig created a large-scale piece around the story.

On June 11, we had a double-header in two DC spaces; Read Lucretia followed by Hear Lucretia. Alan Paul, Associate Artistic Director at the Shakespeare Theatre, created a script that wove together the Shakespeare, Livy, Chaucer, St. Augustine, and Duncan libretti, which was then read by actors Katie De Buys and Gregory Wooddell. (I was in awe, listening to the actors read Duncan’s words without Britten’s rhythmic structure – some phrases innately had the same rhythmic stress, buy many offered new insight. It was fascinating!)

We then headed uptown to St. Stephen’s and the Incarnation for an evening of activism and art. Our partners, DC’s Taffety Punk, have an existing show that is a multidisciplinary exploration of the Shakespeare poem – dancers, electric guitar, spoken word, original song. Together, we worked in Wolf Trap Opera Filene and Studio Artists singing Lucretia-based works by Respighi, Handel, and Britten (naturally). Composer David Hanlon and Louisa Muller, the director of our production of Lucretia, wrote an original duet that made its world premiere at the event. Prior to the event, representatives of the DC Rape Crisis Center and Men Can Stop Rape addressed the audience. We also were treated to two theatrical pieces; the premiere of a confessional piece by classical singer and performance artist Tracy Cox, and excerpts from Teresa Spencer’s blog, Too Like the Lightning (Prose Poems to my Almost Loves), in which she responds to catcalls.

The final event was a panel discussion on June 12th after the Sunday matinee, where we could Consider Lucretia and turn to the experts to discuss some of the larger themes of the piece. Panelists included Lisae C. Jordan Esq., Executive Director of the Maryland Coalition Against Sexual Assault, General (Ret.) Lester Lyles of the US Air Force, Conductor Craig Kier, and singers J’Nai Bridges and Kerriann Otaño. Kim Witman led a discussion that touched on military strategy, demonstrated the progress that has been made in regard to the prosecution of rape since the original occurrence in 510 BC (spoiler: not much), and spoke strongly to the responsibility that the arts and artists have to tell these stories, especially those that are difficult to tell.

It was a real privilege to launch into a larger conversation sparked by the opera , and to collaborate with artists, scholars and activists throughout the DC area. Many thanks to our collaborators and partners.