At the hotel, Cosimo and Tancredi also bemoan their dreary existence in Santa Schifezza and the circumstances that have stranded them there, lira-less, on their way to Palermo. A knock at the door. The Mayor enters. Tension. 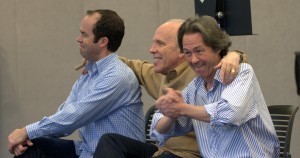 Through a few misunderstandings, the Mayor concludes that Tancredi is, indeed, The Inspector; he offers him a tour of the town, a stay at his villa, and—in the best tradition of business incentives—stuffs his pockets with cash.