Ah, the paperwork phase of sorting all of this out. The information in front of me falls into the following general categories: 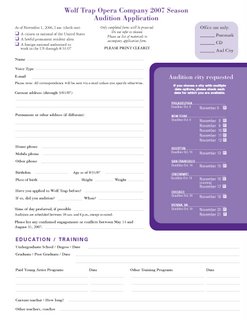 Academic and/or conservatory training: It’s extremely rare that we’ll take someone without either an advanced degree or a stint in a year-round YAP. Each year we end up hiring a few people who are still finishing their post-graduate degrees, but the majority of our folks have recently finished formal training.

Other training programs (young artist, apprentice, etc): Knowing that you’ve been involved in an apprentice program or had other opportunities to get comfortable onstage is very helpful. Singing small roles, doing covers or chorus, and watching other professionals in the opera business prepares singers to make decisions about what kind of singer they want to be.

Awards / competitions: Do you regularly put yourself “out there”? Not strictly necessary, but a lack of any recognition 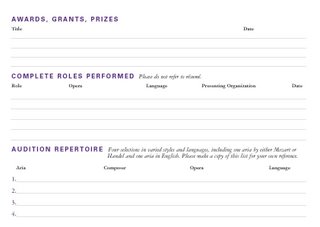 is a worrisome sign. Staying safe and comfortable inside the studio is necessary for a while, but by the time you audition successfully for us, you’re ready to strut at least some of your stuff.

Full-length roles performed: We’re looking for people who have a least a couple of roles under their belts. Only having sung scenes programs doesn’t mean that you won’t be able to tackle a role. After all, you have to start somewhere. But this isn’t exactly the place to start.

The résumés contain other helpful information, but the first cut is really made on the basis of these four things and where they intersect. No one factor trumps all others, but the aggregate needs to be strong. I have very little backbone when it comes to saying no to people, but weighing in on the low side of 2 or more of these factors indicates that a singer probably isn’t ready for a program like ours.

I know, this all sounds more than a little cocky, but consider this. Our singers have to show up with full-length roles thoroughly learned and completely memorized. Their languages must be strong enough that they can communicate well onstage and accept very detailed fine-tuning instruction from our language coaches. The technique must be secure enough to withstand the rigors of a professional 3-week intensive rehearsal and tech period. And although we are a program that exists to help emerging artists transition to professional careers, the visibility is fairly high. Yes, it’s better to premiere a role here than it would be to do so in a large company. But our performances are reviewed by metropolitan and national press, and they are attended by VIPs from other opera companies and management firms. Trust me. You don’t want to jump into this pool if you’re not ready.

And even though this might sound kind of formulaic, it’s all relative to the amount of competition for any given audition site. This is the second year in a row that Chicago is a hot property. (Truthfully, I think it’s because it had the latest application deadline.) 105 applicants for one day. Last year was busy in Chicago, but it was the first time in many years, and I thought it was an aberration. It wasn’t. And because the travel arrangements and the hall reservations had to be booked months ago, we can’t extend it to two days. So the Chicago pool has to be cut by two thirds.

We have no age limits, but we are still a company for developing artists. Ah, you say, aren’t we all perpetually learning and developing? Of course. So how to figure out whom we should serve? What is our demographic?

There’s a sweet spot, right after you’ve pretty much absorbed and tolerated those half-dozen or so years of full-time introductory study, and before you fall into a career pattern. I’m going to take a real chance here, for I know I’ll get hate mail. But here are a few descriptions of singers we feel we are not in a position to serve. Those who have already performed a series of supporting or leading roles in regional or national-level companies. Those who finished the intensive part of their training more than 3 years ago. Those who have embarked on successful careers outside of the U.S. and are looking for ways to jump-start their careers in the states. If we existed simply to grant singing engagements to performers who desired (and deserved) them, we would be an entirely differerent sort of organization.

Can you be over 30 and apply successfully for our company? Unequivocally. Although our average age hangs around 26-27, each year since we’ve dropped the age limit, we’ve had at least one 30-something in the company. If you went to school in your early twenties, dropped out of the opera scene and returned a few years later, we’re happy to consider you. Likewise if you change Fach or begin a new career in music much later than the traditional student. But in these cases, even more than usual, we’re looking for momentum.

Over the last year or two, do the companies who have hired you, the roles you’ve been assigned and the awards you’ve won show that you’re moving forward? If you’re breaking back in, and you haven’t sung a role in 3 years, that doesn’t mean that we won’t ever consider you. But if other applicants are showing a significantly higher degree of activity and recognition, you may get passed over. But by next year, if you persevere, yours could be one of the applications that rises to the top.

I know that most performers are loath to believe this about the beasts behind the table, but there are lots of us who are painfully empathetic. We know you work hard, that you’ve spent a lot of money in pursuit of something that calls out to you, and that you know you have something important to offer. I wish I could take every single one of the singers reduced to these pieces of paper called résumés and grant each one a satisfying career in music. I do, perhaps foolishly believe, that for those whom it matters in the right way, there always is a life in music.

I listen to CD’s through headphones attached to my laptop. My computer plays the files through iTunes, and usually the selections show up as Track 01, Track 02… Occasionally, just to keep me awake, the iTunes tagging software thinks it recognizes the CD and gives it a name. Tonight’s entries included “Sex Beat” by the Gun Club. It was actually “Cruda sorte” from L’italiana in Algeri. Actually, not quite as far from “Sex Beat” as one might think…