I would love to spend time in Chicago some day. Time, that is, that doesn’t include 78 auditions. (Many of which were marvelous, mind you. But still…)  I understand that there’s an amazing architectural tour. There are beautiful neighborhoods I’d love to visit. And many friends to meet at amazing restaurants.

But sadly, our Chicago drill exclusively consists of a hotel (albeit a beautiful one…)

…and the inside of a recital hall (again, beautiful…see at right) 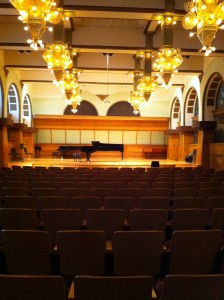 Nonlinear thoughts from the audition room at Ganz Hall:

A mad dash from O’Hare to Dulles on Monday morning, then 60 more auditions back in Virginia.