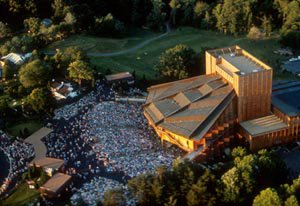 As we close in on repertoire for 2006, I’ll take a moment to share my pain. The subject is our large amphitheatre – the Filene Center. The dilemma: deciding which opera to produce in the Filene Center each summer.

#1) The capacity for Filene Center opera (different than that for concerts because of sightline issues) is 6,130 (3,730 in the house; 2,400 on the lawn). In order to come close to filling the seats (on a single ticket / no subscription basis, thank you very much) and recouping even a portion of the expense of performing in such a large house, it’s essential to program an opera that has instant and widespread name recognition. Not just among opera fans, but on a man-on-the-street level. It’s important to our bottom line and our mission that we attract first-time patrons who might not try opera in a more formal venue, but just might come to Wolf Trap to try out an operathat they’ve heard of before. The operas that meet that household name test are represented in lists like Opera America’s “Top Ten” (Sometimes this general category is called the “ABC’s – a.k.a. “Aida-Bohème-Carmen”)

#2) The singers of the Wolf Trap Opera Company are emerging artists, and their average age usually hovers around 26-27. Most of these voices are still developing, and the heft, stamina, and general requirements of grand opera are not a good match for the vast majority of singers in the first few years of their careers.

#3) The kicker. #1 and #2 are, to a large degree, mutually exclusive. The only operas that easily fit into both categories are The Marriage of Figaro, The Magic Flute, Don Giovanni, and The Barber of Seville. Those are terrific shows, but the list is, well, short. (This would make a fascinating Venn diagram, but it’s after midnight, and the time for illustrations has passed.)

Why not do Magic Flute every year? What exactly is wrong with doing Aida anyway? And didn’t Wolf Trap do La bohème last year? All good questions. For another day.