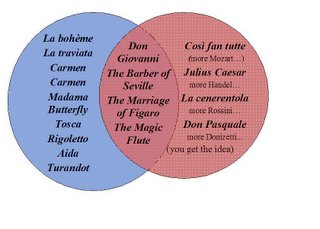 Wolf Trap’s Holiday Sing-Along was terrific. Thousands and thousands of people… hundreds of little children on the stage during “Jingle Bells”… good December weather… a huge truck filled to the brim with Toys for Tots. Unfortunately, I sang myself out and was in tatters for the second event of the day, the Messiah Sing-Along at my church where I was due to stand in for our contralto soloist who is battling bronchitis.

Explanation required. I am not a singer, strictly speaking, but occasionally I haul my voice around pretty fearlessly, and I’ve absorbed enough basic information about intonation, phrasing, and placement to unwisely twist my garden-variety soprano into an imitation of a mezzo. It’s not a healthy vocal production, and it doesn’t hold up well after an hour of leading carols in freezing weather. Anyway, I sounded like a cross between Carol Channing and Rod Stewart. Huge hole on both sides of the bottom register break. Any salvageable music came out of it was a minor triumph of chutzpah over talent. (Or, as my friend the sick contralto reminds me, it required “more guts than sense.”) :) All of this, of course, was designed to give me true empathy for all those singers in my life.

Tomorrow – back to casting!

JSU caught the Freudian repetition of Carmen on the “popular” side of the highly unscientific Venn diagram. I’d fix it, but the fact that I listed it twice amuses me.