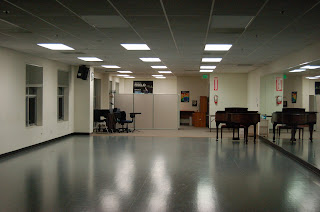 We kicked off the fall audition tour with a strong start in Los Angeles, and as I was emptying my portable office of its seemingly endless gear, I was reminded of this NY Times article from last summer. I bookmarked it with a reminder to revisit this topic during the audition tour, and this seems like a good time. Clearly, sending casting updates and audition comments via Twitter crosses a line. But the location of that line is much harder to see when you’re near it.

Full disclosure: this is how technology helps us in the audition room.

Yes, we use laptops. And no, we are not trying to be rude or ignore you. I’ve seen plenty of audition panels eat their lunches, do crossword puzzles, manicure their nails, and doze. Being rude does not require a computer, and typing on a laptop does not constitute an affront. Fact is, I can touch-type 10 times faster than I can write, and I can do it while I watch you perform.

I’ve kept the same auditions database for 16 years. The layouts are set up so that while we’re listening to a singer, any previous years’ audition comments are off the active screen. You can scroll to see them, but don’t have to be influenced by them. And at the end of the day we can put all of our comments side-by-side so that we can see patterns.

We make video and audio recordings of each audition. They are saved onto hard drives. When we have our group of finalist candidates for the season, we review this media. It’s always illuminating, and not in predictable ways.

Going back to the performances helps jog our memories of those auditions, and it gives us a chance to re-experience them (or a digital vestige of them) on a different day at a different time in different circumstances. They fill out the picture and help begin our deliberations. After casting is finished, the files are deleted. They’ve served their purpose, and the aggregate size is too large to archive anyway.

Yes, we travel with a printer. We print revised schedules for the day, keep track of possible repertoire as it emerges, and – most importantly – print boarding passes so we can sprint to the plane at the end of the day :)

And here is where I’m sure I’ll get into trouble with someone. We use IM to decide on which aria to ask for next. It is way more efficient and thorough than hushed 3-way conversations while the singer is waiting at the other end of the hall. We can think through possible 2nd aria requests quickly and make sure we’re choosing wisely.

I know that some of you think we’re carrying on casual and unrelated IM correspondence during your audition. Although that might be tempting for the first few minutes or hours using this technology, in reality, it’s far more boring than that. There’s a lot to be done in documenting your audition – listening fiercely, writing comments that will help us make finalist and casting decisions, jotting down notes that may be helpful to singers when they request feedback, figuring out what the best 2nd choice will be – and there’s really no time to chit-chat.

No, we’re not going to tweet our audition comments. I think everyone realized that that was just plain stupid. But I am about to blog my 6th audition tour, and that’s always a little scary. I started this blog because I believed that singers and fans alike deserved to know more about what really goes on behind the curtain and behind the audition table. Yet it’s extremely difficult to do that without invading privacy. I hope that I have managed so far, and I will continue to do so. There are some things that are simply private. There are others that deserve to be openly acknowledged and discussed. Then there’s a third list that includes important knowledge for aspiring singers but needs to be obfuscated in some way when the story is told.

The opera world and the arts in general have gotten way more transparent since I started writing in the fall of 2004, and that’s a wonderful thing. Hurtful gossip and twisted storytelling will always spread like wildfire, and it’s only fair that we now have news ways of counteracting that by keeping the real and important conversations open.