As we leave New York, we seem to be suffering from multiple systems failure. I’m not referring to the BSOD that plagued my laptop earlier this week – that was remedied in surprisingly efficient fashion, thanks to terrific IT support from Wolf Trap and a few handy screwdrivers from the tech staff at Carroll Music. The systems failure of which I speak is more personal and invasive than a simple laptop meltdown. I’m just disappointed in my own performance during this year’s tour – an increasingly dysfunctional series of dropped balls and missed opportunities.

If you auditioned for us this year, do not despair. We have not compromised the main function of this month, which is to identify the best candidates for next year’s roster. It has been an exciting time, and we have (as is typical) identified more wonderful singers than we can hire. By the end of today (the last day of the tour), we will probably have called back about 45 singers who are our group of finalists for 2009. (As a reminder; Studio candidates did not get callbacks, and our selection of Studio Artists will take us into January.)

I have, however, fallen woefully short in my quest for the efficient and linear thinking and action that would’ve helped this month run more smoothly. Somehow, I didn’t find the extra hours needed each day to process what we hear, advance the process of repertoire selection, keep up with the other responsibilities of my job, carry out meetings with colleagues in the cities we visit, and keep up with things like this blog. (I barely Tweeted, too, but somehow I don’t regret that. Addio senza rancor, Twitter.)

I know that many of you follow this blog during the fall audition season, and I apologize for the dearth of material. I have begun churning out this year’s version of the Aria Frequency List, and I promise it within the week. And I have been wrestling for a few days with a rather philosophical post (danger, Will Robinson…) about singing and the opera business – it requires a bit more thought before it crystallizes, so I’m letting it stew just a bit before I foist it upon you.

I Never Travel without my Box

Yes, I do have a slightly unhealthy obsession with organization. I am irrationally proud of my audition gak box, and judging from the reactions of TSA security screeners across the country, I am somewhat justified. (One of the screeners this year wanted to write my 2nd grade teacher to tell her how proud she would’ve been.)

Witness all the detritus of our portable office… 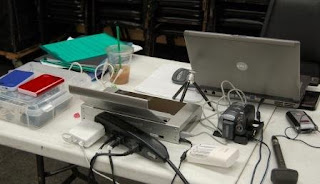 and see what happens to it when it’s corralled into my beautiful plastic box! 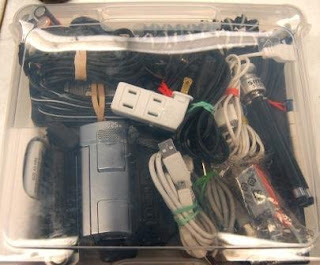 It’s a good thing it’s a satisfying process, for packing and unpacking the box twice daily (once to set up in the audition room, and once in the hotel room where all of the data is backed up and integrated) is not for the faint of heart. I tried all month to get my colleagues to embrace the Beauty of the Box but failed miserably.

As always, the New York week was dense. I heard and saw breathtaking performances by the Met (Damnation of Faust) and the New York Festival of Song (The Fugitives), both of which I’ll address later. We caught up with as many colleagues and friends as we could, and we made good process on a newish project for this coming summer. But my audition tour fitness goal came to grief – I ran my 2K in every city up until now, but in spite of optimistically bringing my sneakers, the most exercise I got was lugging the portable office 1.5 miles to the audition site every day. Perhaps that counts.

Rahree’s back and neck protested at being required to haul around 50 pounds of luggage, and I’m indebted to her for finding a great spa with Swedish massage just a block from the hotel. CameraMan suffered from the plague this week, channeling his inner Barry White voice. I only had to deal with what they call my Transportation Allergy (I sneeze incessantly on planes but nowhere else) and insufferable crankiness (which I hope doesn’t show in the audition room – actually, the grumpier I get, the more irritating perky I seem to appear in the room…). Lunch hours were spent either meeting with colleagues or splayed in a variety of restorative yoga poses.

The process of translating aria performances into descriptive language is a challenging one. Every time I face it down, I wonder if I’ll remember how. But it’s like riding a bike, I guess.

The goal is to describe a singer fully enough to be able to relive and reconstruct his/her performance later, but not so self-consciously that too much of my brain is devoted to coming up with words. Keeping as much attention as possible centered on the performance while simultaneously describing it. It has to be simultaneous, for memory is quickly obliterated when hearing 500 singers.

Rahree mentioned a few days ago that she seemed to be running out of adjectives. A friend suggested that she revisit Schoolhouse Rock. Well, it seems I really missed out, for I am too old for School house Rock, and my kids are too young. But a few minutes of Unpacking our Adjectives at lunchtime gave us a new arsenal of musical descriptors: Soggy, Foggy, Stinky, Sunny, Brainy, Hairy, Scary, Prickly, Bumpy, Flowery, and.. oh yes… Flat :(

So today we are in Philly, holding 7 hours of auditions in a rehearsal room where somehow there is no heat. The left wall abuts the outside, where it is just slightly below freezing. Quotes of the Day: “When it’s this cold I’m used to having a beer and a hot dog and watching men in spandex.” (Rahree) “I’m not used to seeing my breath when I sing.” (A Wise Bass)

And now the crunching begins. Much tougher this year, and perhaps that’s why I’m cranky. Last year we had 12 singers returning from a previous summer with us – that meant we were really well-acquainted with the strengths of almost two-thirds of our roster. This year, it is much more wide open, for as these things go in cycles, fewer singers are eligible to return. A good thing for applicants, for we have a bigger opportunity to hire new people; but a bigger challenge for us to determine exactly which roles are right for folks who have only sung for us for about 15 minutes.

I need a couple of days to sleep and veg, and I am optimistic that clarity will return. Then we’ll start working on repertoire and calendar in earnest. Back at you over the next couple of weeks with final audition season posts. Happy Thanksgiving!