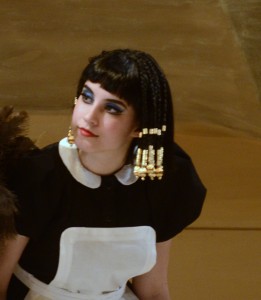 When I took a tour of The Barns at Wolf Trap as part of my summer copywriting internship, I never thought I would be performing in an opera on their stage just a few weeks later. Maybe the phrase “performing in an opera” is misleading: I’m a supernumerary (or “super” for short), a nonspeaking (and more importantly, non-singing) extra in Wolf Trap Opera’s production of Handel’s Giulio Cesare, a baroque piece that tells the thrilling and mostly fictional tale of Julius Caesar and Cleopatra’s courtship. I only recently learned how to pronounce the title of the show (Joo-lio Che-sar-ay) after avoiding saying it out loud for the first two weeks of rehearsal.

How does one become a super? In this particular Wolf Trap production, we came from all walks of life – a chemistry professor from Brigham Young University, an opera grad student from Maryland, several Wolf Trap employees, an experienced extra whose young daughter got a kick out of seeing her mom in costume. Some responded to Wolf Trap’s Facebook post, others (like myself) received an email advertising the position. Though I had little to no performing experience, I realized it was a rare opera-tunity, so I decided to go for it. My only qualifications were that I had a pulse, and I was free every night from 7-10. Thankfully, that was all they needed.

The process began with a series of costume fittings that forced me to accept the poking and prodding of several kind strangers. By the fourth round of fittings, I barely registered the hands adjusting my bust line. Needless to say, I bonded with the costume crew the fastest. A Cleopatra-style wig decked in golden beads (Egyptian bling) complements my French maid outfit, which also includes a pair of the highest heels I’ve ever worn. As an added challenge, the stage is covered in sand, and in one memorable scene my fellow maids and I have to scamper across without falling on our faces. I’ve taken necessary precautions and practiced my reaction to my inevitable wipeout ahead of time: once it happens, I’ll jump up and look angrily at the person closest to me, blaming them for making me trip. (Note – I have managed to stay upright throughout rehearsal, so let’s hope my track record continues to be injury-free.)

Working 9-5 and then rehearsing from 7-10 every day was a blessing and a curse: on one hand, it was brutally exhausting, but on the other hand, it gave my fellow super/intern John and I an excuse to eat way too much sugar so we could “have enough energy to get through the day.” And though we spent about the same amount of time complaining as we did actually rehearsing, there is something uniquely rewarding about being a part of a production, especially a show that features so many gifted individuals.

It’s not every day that an average Joe (or Jane?) like myself gets to share the stage with the future stars of the Metropolitan Opera. I often had to stop myself from “ooh”-ing and “ahh”-ing in the middle of the arias so I could pay attention and not miss my entrances. The Cesare principal cast members (and their counterparts in the ultra competitive world of opera) are some of the most dedicated, hardworking, remarkable artists around. Their commitment to this particular art form requires constant training, years of schooling, and a deep understanding and appreciation of the many languages in which operas are written, not to mention the physical demands of sustained vocal excellence.

The definition of supernumerary may mean that technically, we supers are excessive, but we do have value. We fill space. We add comic relief. We look cute. Most importantly, we help highlight the principals’ incredible work. If a great production is like a delicious meal, then we are the seasoning. We bring out the flavors that make it taste so damn good.