I worked the Lang Lang concert. It’s always fascinating to see a pianist who’s completely at home at the keyboard. There are pianists who conquer the instrument, who dominate it and make it speak volumes. But it doesn’t always follow that the keyboard seems to be a completely natural extension of them. I’m not being articulate, but the distinction seems so very clear somewhere inside my head.

I didn’t work the Galway concert because I had a technical rehearsal for L’Etoile. But I made a quick run over to the theatre to hear the Pines of Rome that was supposed to follow Galway’s appearance. Got there a few minutes early, just in time for his Danny Boy encore. It was a long night, with several hours ahead yet, and the idea of Danny Boy wasn’t particularly appealing. Guess I was having a music snob moment.

I have to say, though, that even though the idea felt like kitsch, the execution was completely satisfying. Simple, honest, heartfelt, unapologetic, all that good stuff. Followed by some gloriously bloated Respighi, complete with bird calls, 32′ organ stops and herald trumpets from the U.S. Army Band. Emil de Cou called it a giant deep-friend symphonic Twinkie. (To truly appreciate Emil’s wacky sense of humor, spend a couple of minutes with his YouTube ad for our NSO concerts.)

Life After the Woods 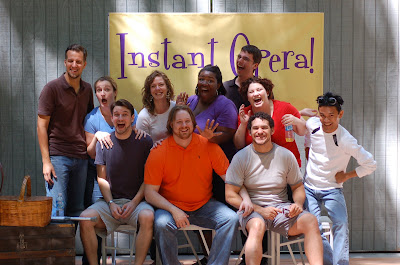 We finished up our week of Instant Opera with a couple of atypically glorious midsummer mornings. You’ve heard me talk a lot about this project, but I’m struck again and again by how well this experiment seems to have turned out. We started out 2 years ago with a goal that even we weren’t sure we could reach. And we surpassed it.

What do the kids and their parents seem to learn from these crazy mornings of improvisational acting and singing?

That there are smart and funny 20-somethings who sing opera.

That they do it willingly and happily at 11am for hundreds of small children.

That the crazy conventions of opera are pretty simple after all. By the end of the show, everyone knows the difference between bravo, brava and bravi. They can also order a hamburger in recitative.

That there can be a sense of excitement and total investment in opera that has nothing to do with the stereotype of large immobile people in boring costumes parking and barking.

And, as if that weren’t enough, what do the participants take away from the woods?

Well, for starters, that they can get up on stage and negotiate every curve ball thrown at them for 15 whole minutes and live to tell the tale.

That they have the recipe for Mozart recitative so firmly imprinted on their subconscious that they can navigate around the circle of fifths unerringly and convincingly.

That their colleagues are not only talented, they are also gracious.

That it’s possible to bring their art to the uninitiated without boring themselves or patronizing the audience.

That almost nothing will happen to them onstage for the next 20 years that will surprise them.

Next year we’re upping the ante. Improvised English text during the arias.