sitzen: to sit / proben: to rehearse 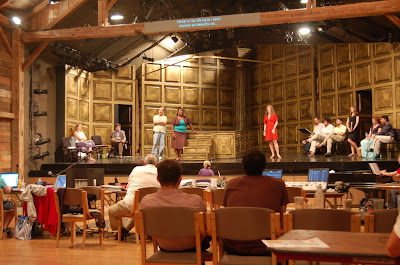 The singers don’t always sit during the Sitzprobe, but it’s a much less active rehearsal than the rest – particularly for this sometimes-physical comedy. It’s a time to temporarily shelve the costumes and props and focus on the music. The singers and orchestra hear each other for the first time. Some singers go back to their scores for the Sitz, some continue to operate only from memory. It’s a really individual thing, and it has a lot to do with individual styles of learning.
Sometimes the Sitz becomes a Wandel, and the performers hit their marks on the stage, not really executing the blocking but generally ending up in the area of the stage from where a certain part of the score is sung.
The Sitz is one of my favorite touchstones in the production period, and one of my least favorite days in the summer. The former because it signifies the final coming-together of all of the wonderful and various elements of an opera. The latter because the orchestra pit in our theatre is a difficult place, desperately in need of renovation and enlargement. The players approach it with a mixture of tolerance and resignation, and squeezing 28 musicians into it for two productions every summer is an exercise in flexibility, good humour, and willingness to overlook the details for the greater good. Perhaps someday I won’t dread the Sitz…