So much to report, but the week has flown by at such a dizzying clip that there’s been no time to post. A blurry succession of 15-hour days. Not without their challenges. This is what I get for boasting that we were over the hump. Halfway through the summer calendar maybe, but, as I’ve been reminded, we have miles to go before we sleep.

Le Comte Ory is going marvelously. I have been largely absent from all rehearsals (not my typical pattern) due to various complications. But comedy beckons, and I can’t wait to respond. Orchestra sounds terrific, and the singing just sparkles. The production is adorable. (I know, that’s an odd choice of adjective, but once you see it, you’ll know what I mean.) 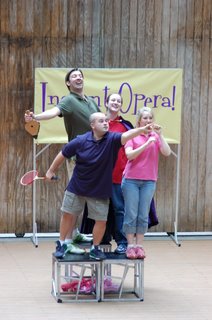 Once upon a time…

… in a log cabin, George Washington and Bugs Bunny went hunting every day until Mozart came and caused a flood. We managed to work Beethoven into the plot. There would’ve been other composers but they were haydn. (Sorry. But it was part of the recitative…) The photo shows the cast’s own take on crossing the Delaware – George Washington, Bugs Bunny, Mozart & Beethoven crossing Wolf Trap Creek. Improv opera for about 2,000 children and parents over the last four days.

Gangbuster weekend of National Symphony performances at the 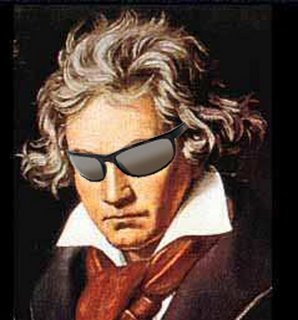 Filene Center. About 16,000 people in 3 days. Some of the best July weather we’ve had in years. Itzhak Perlman (conducting and playing) on Thursday, a spectacular multi-media Holst Planets on Friday (with Hubble telescope images from NASA and narration by Spock himself), and Beethoven last night.