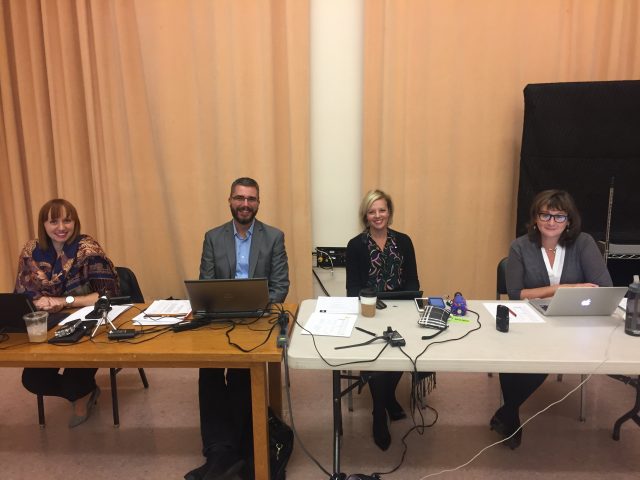 We had a lovely start to our audition day, with a greeting from one of the nicest stage door guards we’ve ever met! And periodic visits with SFO colleagues, friends, and WTO alums continued the good vibes.

Variety abounded again today, and for that we are grateful. (I’ll take an Old Fart Moment here to express appreciation for the way it seems the canon of audition arias has expanded and diversified over the last few decades!) We also heard a few really lovely art songs from our Studio Artist candidates – including one of Griffes’ Songs for Fiona Macleod and a selection from Copland’s Emily Dickinson Songs.

Russian arias are increasingly common. Things like selections from Eugene Onegin, Yeletsky’s aria from Tsar’s Bride, and Tchaikovsky’s Joan of Arc scene have been staples for a while. But Aleko’s cavatina, Gryaznoy’s and Marfa’s arias from Tsar’s Bride, and Robert’s aria and Iolanta’s arioso from Iolanta are appearing more and more regularly.

From Behind the Table

Yesterday’s admonition was “Don’t sing to the floor.” Today’s is “Please don’t pace.” Singers who do it don’t even realize it, I know. But it saps energy and focus from your performance. By all means, move whenever you need to. Purposeful movement is a powerful tool. But ambling small steps right then left every second or third phrase are a surefire way to undermine yourself!

Killer pants outfits today. One in a blocked B&W (mostly black, with the bodice in white), and another completely black. But super elegant. Oh, and one of them was expertly worn by (wait for it…) a soprano! <gasp>

A fashion note for the guys: not about audition wear, but still potentially useful. The topic of Coregami’s tuxedo shirt came up today, and I hear that it’s getting rave notices. If you need a tux shirt that looks professional and remains crisp from gig to gig (subway rides and plane flights included), check this out.

On To New York

Speaking of flights, we’re heading back to the east coast tomorrow. No auditions for our Tuesday, but our longer flights are a great opportunity to continue our repertoire research and brainstorming for next summer. And that can only mean one thing. The first iteration of the 2017 Short List is imminent…!