I have to weigh in on the veritable snowstorm of reporting and critiquing that’s been done on last weekend’s premiere of Tobias Picker’s An American Tragedy at the Met. I was not lucky enough to see it, but I am looking forward to hearing it on the December 24 broadcast. Thanks to An Unamplified Voice for culling many of the various reviews of this premiere.

I’m not a critic, and I’m perpetually bemused, confused, and occasionally angered by reviews. (Go here for last summer’s entry on the subject of our artists and reviews.) Like many of my colleagues, I’ve lived this question on multiple levels. I’ve been the producer who’s received more credit than she should take, and I’ve been the artist who received more blame that she should shoulder. And every variation in between. And of course, because I’m active in this business, I’m constantly asked for my opinion of others’ performances.

I find one thing heartening about the American Tragedy discussion: the fact that it’s happening at all. While I’m at it, I guess I also appreciate the fact that so many people are wading in. For the purpose of all of this is engagement. I’m not sure I care what form that engagement takes, as long as it’s active. It’s a beautiful thing to move beyond apathy, blind acceptance, or uninformed rejection.

I’m getting dangerously close to digressing to the “what is art and why does it matter” discussion, and I can’t afford that diversion today. But I so want this engagement with the music to be the reason we go to the opera house and the concert hall. The music of pop culture (and here I don’t mean anything that’s not “classical”; I refer to any music that’s more about its trappings than its content) is an anesthetic. Pleasant in the way it numbs us and distracts us from the tough stuff in life. What we do in our business needs to be about “aesthetics” in the best sense of the word – not having to do with high culture or good taste, but standing as an alternative to the anesthetic effect of so much of 21st century mass culture. It should make us feel, think, laugh, cry, rage… it should make us care.

Many young folks who aspire to a career in artistic administration have a single-minded focus on one aspect of the job: Casting. No surprise, really, for creating dream casts is a fairly common hobby for opera fans. Also no surprise that fantasy can clash pretty horribly with reality when actual casts are being assembled for productions in the real world. But the most sobering fact is that those of us who oversee opera companies spend a very small percentage of our time on this aspect of our operations. The last two weeks of my life have been consumed with matching singers to roles, but it’s almost done, and there are another 50 weeks of the year to go.

I get a lot of questions about our casting process, so I will do my best to spin it out. I’ll try to keep it from getting tedious. But a certain amount of deadly detail is necessary in order to represent the process accurately and to disabuse readers of the notion that this is a glamorous undertaking.

As I mentioned at the end of the audition tour, we had 29 finalists who were under consideration for our company. At this point, it looks as if we’re going to be able to work with 18 or 19 of those singers next summer.

1) Make a list of operas that contain ideal roles for our finalists (in operas that can actually be produced in one of our very specific venues).

2) Create a master list of the operas above that contain good roles for multiple people. (Jettison pieces that accomodate only a few singers.)

3) Make a series of draft grids that puts the casting of three of these operas alongside the casting needs of next season’s concerts, recitals, and/or outreach performances. I have started out with as many as 30 of these grids, using different permutations and orders of a series of different operas.

The final grid for the 2005 season looked like this: 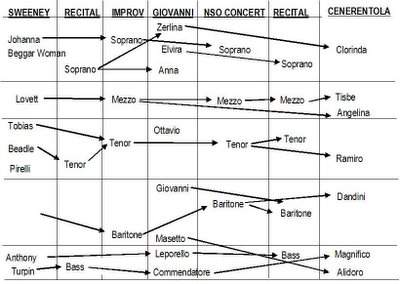 4) See which ones of these permutations accommodate the largest percentage of the finalists in roles that are best suited to them.

5) Choose the most promising few and do an entire season draft schedule that describes in detail how the assignments might dovetail and how the summer calendar might be able to configured in order to present the smallest amount of conflicts between projects. 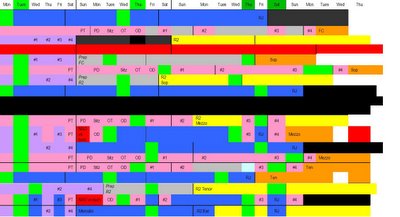 My head hurts from trying to explain this, so I think I’m done. Taking the weekend off from posting – see you next week from the studios of WETA-FM as we record a few more installments of 2006 Center Stage from Wolf Trap.