My early life as a musician was tyrannized by details. I have a hard time letting go of the small stuff, and I wasted lots of hours (years?) obsessing about the wrong things in my music-making. Not because caring about the details is wrong, but because my fixation on them robbed me of the opportunity to figure out what was important. It’s probably why I am so doggedly determined to have the singers on my watch keep sight of the big picture.

Sometimes the whole isn’t bigger than the sum of its parts. Sometimes it’s entirely different.

I’ve been moonlighting recently playing rehearsals for a colleague. (What, you say? Your recent practice did you no good? Go here and scroll down.) The oratorio is minimalist in style, and in trying to play it with very little preparation (sorry), there is significant danger in the details. There’s no way to heed so many fast notes, such micro-tuned tempo relationships, ubiquitous polyrhythms – I’m getting great practice ignoring the siren call of the small stuff. The only way to survive is to pull back, look at it from a distance, try to hear the architecture of the phrase, and make the rest of it up.

I’m exaggerating a bit, but not much.

Musicians who are constitutionally conscientious and fastidious (you know who you are) are the darlings of conductors, colleagues, and producers. Their research, preparation and meticulousness are reassuring and enviable. But sometimes they’re just keeping their demons at bay. For years, the only way I would ever play something in public (even in a rehearsal with colleagues) was to believe that I had prepared for it more than anyone could ever expect me to. As if I was stacking some invisible ledger on the plus side, and could therefore be forgiven if (God forbid) I made a mistake.

If you find this ludicrous or exaggerated, you don’t live on the dark side. I’m sure there are plenty of you who know exactly what I’m talking about. My life’s work is to never forget the folly of living that way. I’ve figured out how to make music without going through this torture – and it only took me a few decades. And truth be told, it also meant making a decision to allow my life as a musician to take place in relatively low-profile, non-threatening circumstances. I don’t think I ever had the chops to be a serious performing musician, but I know for sure I didn’t have the temperament. If the stakes were higher, the demons would undoubtedly not stay at bay. Those of you who manage to stay loose and keep your perspective while playing at the top of the game have my utmost awe and respect.

This diatribe is brought to you by the fact that the curtain is about to go up on my annual “performance” – the summer opera season. And I’m not ready. I haven’t dotted all the i’s, I didn’t lay infallible groundwork, and I certainly failed to anticipate any and all problems before they occur. Yet it begins nevertheless, and I have to let go of unfinished business. Pretend that I’m seated at the piano, and allow the details to be born aloft by the vision. Because it is possible, and I can still learn.

The Cleanest Verdi You Ever Saw 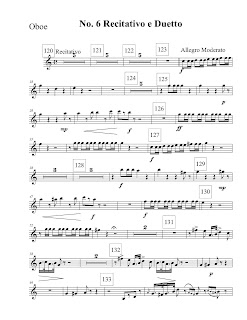 OK, so the Giorno orchestra part marathon should be over in a few days. Just to remind myself that it’s worth it, here’s your opportunity to compare the new product with scraps of the old.