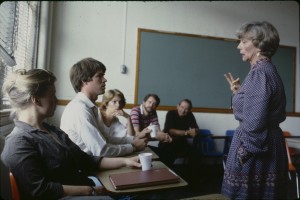 1982 was a difficult summer, for in the wake of the big Filene Center fire, nothing could be taken for granted. Yet the Company had one of its most ambitious seasons to date, with performance in all three venues – ranging from an adventurous sampling of chamber operas in the new Barns at Wolf Trap to Blitzstein and Szymanowski outdoors at the Meadow Center.

No credits were found for the classroom photo above… Could very likely be then-Artistic Director Adelaide Bishop with some 1982 vintage young artists.

With the addition of The Barns to the Wolf Trap campus, the WTOC was poised to go to the next level.