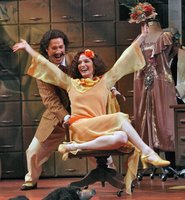 Enjoying a busman’s holiday. Here on business, visiting Opera Theatre of St. Louis, but I really feel like I’m playing hookey*. (Or at least that’s what we used to call it.) Last night, a huge amount of fun was had at Barber of Seville (photo by Ken Howard; WTOC alum Kate Lindsey with her Barber colleague Hugh Russell,).

During my first few years in this business, I wondered if I would ever fit in. The personality types that surrounded me just seemed so strange that it always felt like being in a very foreign country. In retrospect, most of the disorientation came from insecurity and culture shock, from feeling as if I’d never belong. And truthfully, those first blurry years at Washington Opera were full of very cranky divas and divos whose whims seemed impossible to satisfy.

Since that time, though, I’ve come to treasure opera people as one of the biggest assets of this work we do. I suppose most of us, if we’re lucky, come to feel that way about our colleagues. Of course, there are exceptions…. :) But largely, the challenging lifestyle and the way not-for-profit salaries weed out anyone who might be in it just for the money(!), and the underlying and abiding affection for the music give us many important things in common. (And I promise I’ll re-read this paragraph next time I want to throttle someone at work.)

I must report that I’ve received a handful of emails responses to my previous post on spike tape on the rehearsal floor. A few from grateful stage managers, and a few in the category of True Confessions from singers, the most memorable of which read:

I can never figure out the tape on the floor. I walk around the stage and hope that my singing or “acting” distracts the stage management from the fact that I just stood and sang on a fireplace. I am waiting for the day when a director humiliates me in front of everyone by announcing that I’m clearly making my entrance through a wall. Somehow, it ends up working itself out in tech week!

So, if you’re a geographically challenged singer, take heart. You may escape undetected.

Does anyone say “playing hookey” any more? Word sleuths may appreciate this, from word-detective.com:

“Hookey” (also spelled “hooky”) apparently developed from the colloquial phrase “hooky-crooky” common in the early 19th century, which meant “dishonest or underhanded.” The connection between the two phrases becomes clearer when we recall that to “play hookey” properly, one had to pretend to go to school. The child would head out the door at the proper time, schoolbooks in hand, and only when safely out of sight of home would their true itinerary become evident. Of course, the child then often spent the day dreading detection and capture by nearly any grownup, most especially the local Truant Officer.

Alas, even some of us workaholics still spend days off dreading detection and capture by the grown-up version of the Truant Officer.

Have a great Memorial Day weekend.