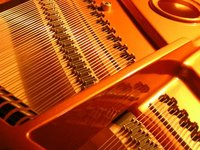 …why I so enjoy these recitals with opera company alums. Well, there are lots of reasons, but one of the best is the chance to play with grown-ups again.

Not to knock all of the amazingly gifted young singers that populate most of the rest of my life. They’re intuitive and musical, generally more talented than I’ll ever be, and their presence is energizing. But as much as I’ve gotten accustomed to playing the mentor role (actually, that’s a lie, I haven’t gotten accustomed to it at all… I still feel like an imposter, but that’s another post…), it’s easy to grow weary of being the perpetual bearer of responsibility, the keeper of history, the bottomless well of encouragement and advice.

But then I get this occasional chance to sit at the piano with a colleague who is comfortable in his own skin, intimately acquainted with his musical voice, and unafraid to speak his mind.

Most of today spent on the second half of the concert. Three songs by Duparc (“Le manoir de Rosamonde”, “Soupir”, “La vague et la cloche“) present one of the biggest ensemble challenges on the program. Tempo a big consideration in the first and third; gotta find that magical place where adrenaline meets traction. Amazing that this guy wrote less than 20 songs. Even more astonishing that he destroyed many of them because he felt they were inferior.

Two songs from Rorem’s War Scenes (“An Incident” and “Specimen Case”). I really haven’t played much Rorem since grad school, and I’ve been mesmerized by these. Texts are from Walt Whitman’s memoir of the Civil War, Speciman Days. Rorem set them to music in the thick of the Vietnam War. And I don’t need to say much about why they’re timely yet again.

A simple, touching song written especially for Alan by a colleague from Ravinia, Robert Gutmacher – “Der Gottsucher”. Then some satisfying Americana – Celius Dougherty’s setting of “Shenandoah” (if Virginia ends up adopting this as her state song, we’ll all be the richer for it) and two of Copland’s Old American Songs (“At the River” and “I Bought Me a Cat”). Alan said he couldn’t possibly sing a recital in a barn without including that last one.

Anyway, most of today’s effort spent on Duparc, with some review of Ibert, and general checking of tempi and transitions. The music is ready – now to tweak the content of the pre-show talk. (An hour before the concert, next door at the Center for Education.)

And I almost forgot… Rich’s group, the Washington Saxophone Quartet, gave an absolutely perfect concert this past Sunday as part of our church’s Concerts at St. Peter’s series. Buy one of their CDs or catch one of their concerts right away.

Off to judge the Middle Atlantic Regional Met National Council Auditions at the Kennedy Center on Saturday afternoon. Back online next week!