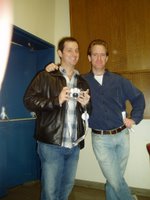 Report from the Road

Visitations from many friends – former Wolf Trappers (Joshua Winograde, Matt Boehler, Keith Phares, Kevin Burdette & Matt Burns – the latter of whom are beaming out at you from the photo on the left), conductors Gary Wedow and Steve Mosteller, and former apprentice director Sarah Meyers (who’s directing the Little Prince production upstairs at City Opera right now). When I mused about the fact that most of our singer visitations were by basses, Kevin reminded me that basses are always in it for the long haul. It’s their basic temperament. It has to be.

Spent another evening at Lincoln Center, this time to see The Light in the Piazza. Related rant found at the end of this entry.

Long recitatives: If you sing an aria with a recitative that’s longer than the aria proper (“Eccomi in lieta vesta….O quante volte from I Capuleti ed i Montecchi is the best example I can think of), you may want to reconsider. Or find a way of offering just the aria with a brief lead-in of recit. Three or more minutes of recitative is a lifetime in an audition setting. Yes, it shows if you have the acting chops to tackle the scene. But sadly, out of dramatic context, most young singers don’t.

Coloratura: You’ve heard the admonitions. It has to mean something. It must be motivated, have intention, color, detail. We know that you know this. But we very rarely see it put into practice. It’s astonishing how easy it is to see the eyes glaze over, the face go blank, the arms and hands begin to clench. Don’t disappear on us. Trust me, I know how difficult it is. But most of these composers knew what they were doing. We’re not asking you to treat these challenging passages as if they were easy. They exist for musical and dramatic reasons. 1) Figure out exactly what those reasons are, 2) Merge the composer’s intentions with your technique and approach to the coloratura, and (this is the hardest one) 3) Make it more than an intellectual exercise. It must, as they say, “read” all the way to the back row.

Biographies: Later on, when your manager provides materials to prospective employers, s/he will include a lovely prose biography that makes you sound irresistible. But for now, you should resist the temptation to make up your own biography and submit it with your résumé (or worse, in place of your résumé.) Let your singing demonstrate how terrific you are.

One of my favorite things to do at the theatre or opera house is mill around during intermission and eavesdrop on conversations. (This irritates my husband, who thinks it’s just plain weird.)

Overheard last night at the Met’s Lucia. “I can’t believe that [insert singer’s name] made that mistake….tsk tsk tsk….”. “I remember Lucia with [insert names of retired famous singers], and it was so much better.” “I think [singer] sounded much better last season.” And on and on.

What I find consistently and disconcertingly missing is any conversation about what is really happening in the theatre. Donizetti isn’t my first love, I’ll admit that. But I’m touched by this young woman whose mother just died. She’s utterly alone, with only her brother to look after her. When he begins to verbally and physically abuse her in Act II, my heart breaks for her. And is it really that operatically far-fetched that she goes mad and kills the husband that she was forced to marry? These things really happen. And not just in moldy old Scotland.

Why don’t we seem to care? Or maybe we do, and it’s just not the kind of thing we talk about. To be sure, grand opera requires suspension of disbelief. Things don’t happen in real time. But that’s what gives them extraordinary power. As the late Robertson Davies said, “Music is the lyre and opera is the underworld of passion and romance that everyone desires but which daily life rarely offers.”

I’m getting way off topic.

Overheard tonight at Light in the Piazza. “The music is hideous.” “The sets and costumes are to die for, but there isn’t a single tune.” “I find the whole thing unbelievable.”

What? OK, full disclosure here. I’m a sucker for this show, and it has nothing to do with my “professional” opinion of it as a theatrical or musical work. I cry almost every time I hear the recording, and I cried through most of the second act tonight.

Don’t we all see ourselves up there? Young people whose entire lives are ahead of them, and whose optimism and belief in the power of love takes your breath away. Husbands and wives who have lost their way and don’t know when or how. Parents who can’t protect their children any more. Kind of like Lucia.

Maybe I’m just sucked into bad black holes when I’m picking up on conversations in the lobby. Maybe it’s human nature for everyone to be a critic. In both cases, at the opera and the theatre, there were standing ovations. So all is not lost.

I think that it was safer when the internet connection in my hotel room didn’t work and I could go to sleep with a clear conscience. Tonight, armed with a backlog of emails, a functioning wireless connection, and a fit of compulsive behavior, I’ve stayed up way too late.