In the throes of the last big crunch. Flute stagings, two L’Etoile performances, arrival of Steve Blier and 3 National Symphony shows in 4 days.

One thing at a time, and briefly, by necessity:

I whined a few days ago about my article for the Magic Flute program. I believe that a few years of blogging have so exercised my informal writing muscles that I’ve forgotten how to pen a single thoughtful, probing, erudite paragraph. So I gave up and submitted this for our printed program.

Brush-up rehearsal yesterday (due to a 5-day gap between performances) was, accordingly to all reports I’ve received, more enjoyable than it had any right to be. Should bode well for this weekend’s performances.

The reviews are in, and we’ve skimmed them and moved on. Always happy when the critics have a good time. More happy (shhh) when the audience does.

I love this particular parade of descriptors, though:

You could do worse with an evening in the theatre. I think we’ll do all comedies all the time from now on. There are worse themes to build a season on, right? (Just kidding!)

See ACB’s post here. She’s in the cast, and I hope she’ll continue to chronicle her week as we lead into next Saturday evening’s performance. 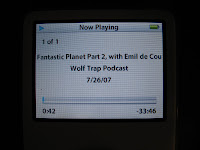 Crazy and satisfying concert last night with the NSO. Some terrific music married to gorgeous images and video courtesy of NASA. And we published a conductor’s commentary (kind of like the director’s commentary that you get in the extra feature on a DVD) that could be downloaded as a podcast, then brought to the concert. Live music in one ear, insights on the music and images in the other ear, and all manner of beautiful pictures for the eyes. Stimulation overload? Well, yes at times. Did it make some of the music and pictures stick with me long after they normally would have. Actually, yes.

The tech press was all over this, and I’m sure the classical music press will be charitable if they withhold judgment. But it was a fascinating experiment, worthy of being held, and holding some promise for the future.