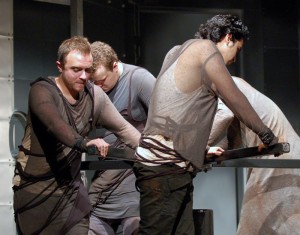 “Remember, this is the curse of being alive: Every man has his own pain.  Let us sing, let us laugh, for no one can change this.” The Slave Chorus in Zaide

The Serenity Prayer was so much a part of coming of age in the 60’s and 70’s that it now runs the risk of being considered trite.  Fact is, I come back to it again and again, and I wish never to underestimate its power.

The chorus near the beginning of Zaide lasts less than a minute, but it lays bare the “accept the things I cannot change” part of the prayer.  The music Mozart wrote to carry these words is a little perfunctory, rather cheery, in D major, with bouncy articulation and rhythm.  Was he serious, or was the cheeriness of the setting a warning that things are not as they seem?

There’s a naïve hopefulness in this music that is somehow touching.  (It doesn’t help that two phrases from this chorus are identical to the refrain of the Christmas carol “Angels from the Realms of Glory.” The latter was written two decades after Mozart died, and I’m sure the resemblance is completely random, but it plays games with my mind.  Argh.)  This tiny musical moment is a kaleidoscope of bravado, irony, hope, determination, and desperation.

I’m usually not hot on the way historians project the situations and emotions from works of art back onto their creators, but it’s really tempting to apply just a little of that approach to this situation.  In spite of the fact that Mozart was an amazing prodigy, and that he put in his requisite 10,000 hours by the time he was in his teens, the adult transition he faced in his early 20’s – right around the time of the composition of Zaide – is achingly familiar.

The young Mozart was wildly successful by many standards.  But he and his gifted-musician-and-mentor father were stuck in what was then a provincial, small-town situation.  He, like many young adults, wanted more, and was being thwarted at every turn.  The Archbishop wouldn’t give his father a leave of absence to travel with his son in a search for a career boost in a larger city.  So the young Mozart set out across Europe with his mother.  All of his attempts in work and love led to failure, and his mother died suddenly while they were in Paris.  At the age of 21 he was forced back home, because the Archbishop said that if he didn’t return, he would also fire his father.

It is against the background of this failed attempt at independence that Mozart wrote Zaide.  Did he echo his own sense of frustration in these two young people?  Is, as some scholars believe, “Gomatz” a near anagram of “Mozart?”  (He actually used “Romatz” to sign some of his letters from this period.)  Ultimately, it really doesn’t matter.  What matters is that the yearning for freedom that pervades this opera is something that is bred into all of us, and Mozart had the gift to remind us of it. 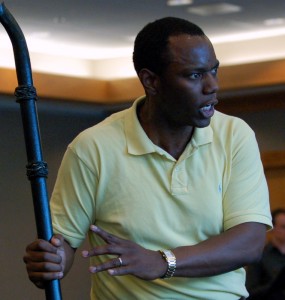 “Be brave, my heart, and try your luck! Create a better future for yourself. You must not lose heart! Through brave daring, the weak often strike back at the strong.” (Allazim, in Zaide)

Postscript:  Mozart did get out, of course.  Two years later, the Archbishop forced his hand, and the composer took the plunge and quit.