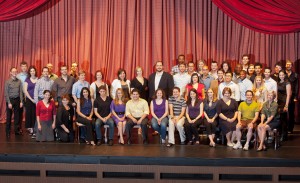 If you come to a show at The Barns (or almost any other opera house, frankly), you could be forgiven for thinking that the people who put together and perform the show you’re seeing have been working together for a while. Months, for sure. Years, perhaps.

What isn’t often realized by audiences is that the well-oiled machine they’re watching is the result of only a few weeks’ real-time collaboration.

Everyone does individual prep work for months. (Far too few months, in our case, as we only hired most of our artists and staff in January and February.) But the time in which they have to form working relationships, identify common goals, hash out the details, and create a working whole is measured in weeks. Days, actually. 23 of them in this case.

When I step back from it, the whole thing seems incredulous. Foolhardy, actually. Many of the rest of us have been afforded weeks and months to acclimate to new working conditions and colleague relationships. But not only are most of the people of our Don Giovanni being introduced to one another this week, they are relocating to a new city, living in temporary housing, and fighting off the DC area’s legendary allergies. They have to simultaneously figure out how to protect their own instrument and artistry, communicate collegially and fluently to strangers, and perform compellingly and with integrity. And then, at the end of it all, to have enough psychic energy to pick up, pack up, move on and do it again somewhere else.

The professional opera world is ultimately amazingly small, though. Even though most of our folks don’t know one another when they first arrive, there’s rarely fewer than two degrees’ separation. And each new gig pulls the community tighter, until after a few years, you start running into the same people again and again. (Some blessedly, some not so much:)) The cities are still foreign, and the living conditions are unpredictable; but the people begin to form a beautifully crazy opera family. (Pictured above: the 2011 Young Artists, Music & Production Staff)

Right now, here, at Wolf Trap in 2012, the Giovanni machine is assembling itself. The scene and costume shops are finding their rhythms, the production and music staff and artistic team are just now in the house, the singers will all be here by Saturday, and the orchestra will join us in a few weeks. Let the magic begin.