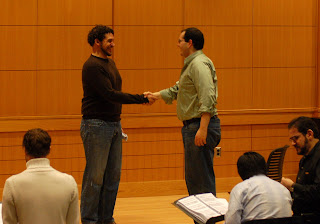 Act I Scene 2 of the Inspector from Rome workshop this weekend. Liam (he said I could use his real name:)) and Dominic (he didn’t say, but I’m sure he won’t mind) are in town, playing Tancredi (the guy who is mistaken for the government inspector) and his sidekick Ossipo. (I always thought that Ossipo stood for Open Source Software Initial Public Offering, but I guess I was wrong. :)

Tancredi and Ossipo are political exiles, fleeing Mussolini’s Rome. They’ve stumbled onto the provincial town of Santa Strozzetta, and they have gotten stuck there because Tancredi has gambled away their money.

Ossipo starts the scene by talking (well, singing) to his stomach. Actually, his stomach talks back to him, too. It’s a nice comic device, but its usefulness goes far beyond shtick. Director Kevin Newbury has remarked that the composer and librettist of Inspector do a great job of solving expositional challenges. Ossipo is ostensibly begging with his poor starved stomach to stop growling, but what he’s really doing is giving us his back story. Efficient and entertaining :)

I’ve had great fun watching the guys talk through these scenes. (And not just because when they treat them as dialogue I get a break from playing the piano.) Singers often rail against a director’s request to treat operatic text as dialogue, but they really should not protest. Yes, I know it’s hard. And some singers aren’t naturally “good” at it. But what you learn about the scene and your character when you allow them to find their own rhythm is invaluable. 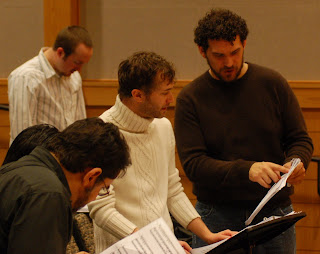 You know there are other things in life
Besides eating.
Your interests should be more diverse!
There’s poetry, science,
Painting, opera,