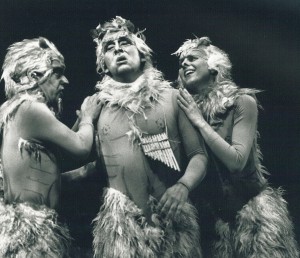 Carl is unique among the alumni on the upcoming August 24 concert, for he was a member of an Associate Artist program run for two years in the 1980’s.  That program was an early precursor for our current Studio Artist program, as it was focused on singers at a slightly earlier phase of their careers. Carl was still a student at Shenandoah Conservatory at that time, and his WTOC roles were mostly supporting ones (which explains the slightly kooky photo of the Satyrs from Cavalli’s La calisto above at left :))

On August 24, Carl returns to Wolf Trap with something a bit different than Cavalli, singing Canio’s heartbreaking “Vesti la giubba” from I pagliacci and Calaf’s commanding “Nessun dorma” from Turandot.