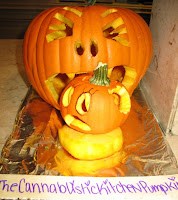 We’re in Seattle, where we checked into the charming Mayflower Park. The staff must’ve had a pumpkin-carving contest, and one of the big winners greeted us at the reception desk. Cannibal Pumpkin!!

A few weeks ago I heard a bit of an NPR story called “Vocal Impressions in which listeners responded to the challenge of describing famous voices. The exercise demonstrates how difficult and how subjective it is to use words to conjure the distinctive quality of a human voice.

The descriptions ranged from strictly poetic to viscerally evocative. Elvis Presley was “the sound of a switch blade opening in a church choir”, and Phyllis Diller became “the sound of an aluminum beer can rubbed on a rusty cheese grater.”

It feels like an interesting creative writing exercise until you have to do it 6 hours a day for 18 days. During this audition tour I struggle to describe the voices I hear in a way that is simultaneously accurate, detailed, singular, imaginative, and ultimately helpful.

What Are They Writing Back There?

Singers have to make their peace with the fact that we’re furiously typing away while they create art. I sometimes watch performances while I type, and sometimes I look away. I hear differently when I’m not watching – usually more critically and honestly. (Something about watching singers brings out the coach in me, and I identify too strongly with the goal instead of assessing the current state of the product.)

The comment-writing agenda divides (not always cleanly) into 3 main purposes:

1) Pure Description. Exactly what do I hear, and how is it best described? What’s the size of the voice, and how would/does it project? Does it have squillo (“ping”) or is it kind of warm and muted? How are the various registers (ranges) of the voice connected? Is there a definable color or timbre – velvety, veiled, throaty, warm, hollow, brittle, rich, pinched, plangent, brilliant, mushy, hooty, shimmering, metallic, soft-grained, silvery, breathy, fuzzy, fluttery, woolly, focused… Do the technique, linguistic, and stylistic skills serve the performance or limit it? How expressive, detailed, and vivid is the performance?

2) Application. What roles would this singer inhabit well at this time? If we were to cast this person, what would s/he be successful singing? What would constitute a stretch? Is it possible to create an opportunity for growth that is also structured for success?

3) Feedback. Because we allow singers to request feedback from their auditions, I do my best to describe the audition in ways that make clear what each singer is doing particularly well and what could be improved. It might seem as if this is a natural extension of the other goals, but not so. It has to be addressed in a separate fashion, and that is tough. It’s probably the reason that most companies don’t offer feedback.

To date, the audition attire has been largely unremarkable (a good thing) and generally successful. A few miscalculations:

Auditions tomorrow at Seattle Opera. For now, this image of CameraMan and the colorful Steinway he wishes he had when he was a child. 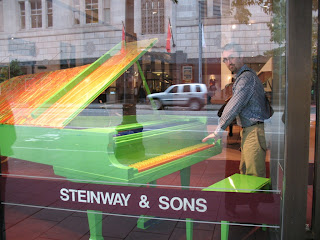