Not doing very well at keeping up with the blog on a daily basis, always striving to do better. But sometimes the choice lies in creating opera or talking about it. 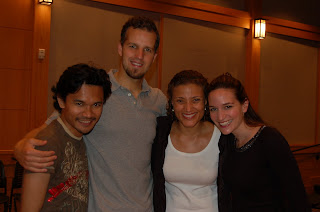 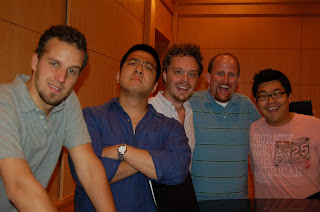 Photos below – snapshots from rehearsal. 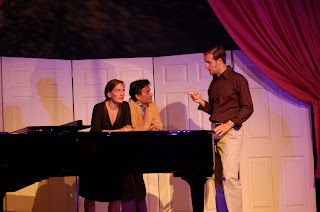 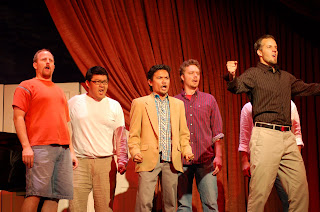 With Volpone in rehearsal, the Berlin Night Life performance this weekend, and the Studio program in full swing, we’re trying to convince ourselves that our reach has not exceeded our grasp. Actually, it’s not that bad, but we are sort of bumping into ourselves, trying to find that magic alignment of staff resources and spaces that allows us to do everything we’d like to. The daily schedule used to take up to 2 hours to create on a bad day… now 2 hours is the starting point. But it’s getting a little easier each day.
The Studio seems thrilled to be here, and we’re so excited about rolling out this program. And it would be delusional to think that we could increase the number of singers here by 75% with no growing pains. Then again, delusions are my life.
Nothing to Prove

Had a bad morning, but was cheered up on my way to work by this story on Weekend Edition. One of the semi-finalists in this weekend’s Van Cliburn Amateur Competition talks about being an amateur musician. He appreciates the freedom of being “released from having to prove anything.” Amen. All musicians – professional or amateur – do their best work when they’re not trying to prove anything. But so often, those who depend on their performances for their livelihood (current or future) don’t have that luxury.

The WTOC’s spring newsletter is now on the WT website. Go there for more details on our season than can be gleaned from our regular web pages.

And…
In further pursuit of lightening my mood, this from today’s Quotes of the Day: Happiness is an imaginary condition, formerly attributed by the living to the dead, now usually attributed by adults to children, and by children to adults. (Thomas Szasz)
And, to make you happy, here’s a snippet of the Comedian Harmonists and Mein Onkel Bumba (who dances a mean rumba).