Working at the Filene Center today, getting ready for Renee Fleming’s concert with the NSO. I’m told the heat is going to break in a matter of hours. :) If it doesn’t, Emil de Cou says he’s going to trot out his Ta Chi conducting technique.

During her 2004 concert, Miss Fleming told the audience that she didn’t think she’d have to wait quite this long for her Wolf Trap debut. See, she tried out for the Wolf Trap Opera Company years ago, but couldn’t get in… At I can say is that it didn’t happen on my watch!

YogaSing. Suzanne Spangler Jackson brought her brand of yoga and wellness technique designed specifically for singers. Pretty much enthusiastically received by our company. A few of them were skeptical, to say the least, but this is tremendously helpful stuff, even if you don’t have natural tree-hugging inclinations.

Deja Vu. Actually sat down at the piano during Romeo rehearsals. Managed to screw up the schedule one Saturday afternoon and didn’t have a pianist available for staging rehearsal. So I gamely plopped myself on the bench and managed not to mangle Act IV too badly. Fun playing the piano again for Stephen Lord. Only this time we both need reading glasses to see the score…

Vivalavoce.com. Visit the Classical Conversations page of Viva La Voce and listen to James Bartels’ interview with our Juliette, Ailyn Perez. She talks about preparing the role. Good stuff.

Go Eric! So very proud to see bass Eric Owens get so many kudos (from press, general public, and colleagues) for his portrayal of the title role in this summer’s Grendel. A Wolf Trap Opera alum, terrific singer, brilliant musician, and all around terrific guy. He deserves all of this and more. The production also featured acclaimed performances by WTOC alums Denyce Graves and Richard Croft. 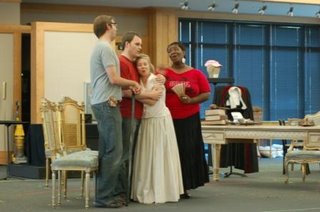 Have been spending far far too much time wrestling with spreadsheets, proposals, reports, and email glut. Spent some time in the Figaro rehearsal yesterday, for the first time since we began. Such a healthy thing to make a re-acquaintance with the fact that there actually is opera happening upstairs. Renews my enthusiasm for yet another go at the budget.

Act III Sextet. The new happy family (Bartolo, Figaro, Susanna & Marcellina) above at left. The disgruntled team of Curzio and Almaviva below. 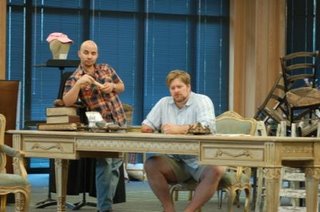