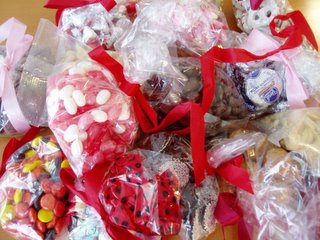 I mentioned a few days ago that one potential response to critical audition feedback is Flooding Therapy. An oversimplified definition: Take whatever frightens you and immerse yourself in it until it loses its power.

This afternoon brought a new application for flooding when the beautiful bag of Valentine candy (sent by one of our most loyal Wolf Trap supporters) arrived in my office. Having just spent the better part of the last 18 months in Weight Watchers meetings, I actually felt dizzy as I uncovered at least 20,000 cellophane-wrapped calories. (This is, sadly, not an exaggeration.)

Anyway, I figure if I could let it sit on my desk for a few weeks and not eat it, maybe I’ll cure myself of my sugar addiction. Or not.

I was reminded last week that I should never take the quantity and content of audition room chatting for granted.

There’s very little conversation that takes place during a typical audition. “Good morning/afternoon/evening. What would you like to sing?” followed by “Would you please sing the [Mozart] aria?” and finally by “Thank you.” Maybe it’s because this always seems so sterile, or because I’m bored with the same old exchange of words, that I tend to jump in with chattage. Comments on a rare aria, the weather, a particularly cool headshot, a colleague we have in common, whatever.

Truthfully, we also do it with the goal of relaxing a nervous auditioner, and sometimes it’s a ploy to unearth the personality behind a cautious, do-no-harm performance. We do tend not to talk much before a first aria, though, because it’s heartless to interrupt the initial walk-in-the-room, hand-music-to-pianist, say-hello, start-singing loop. Prime time is before a second aria request, or particularly, as someone is exiting.

What I underestimate is that so often the singer reads something into our brief exchange. The norm is so formulaic, so formal, that any deviation feels as if it must mean something. I guess sometimes it does, but frankly, we’re not that smart. Sometimes it simply means we’re trying to be civilized. But the lesson in this for me is that I shouldn’t take these things lightly.

Case study: a true story. And I think I can tell it because the soprano in question actually ended up getting hired by us. It was the end of a very very long week, and this soprano woke us up with a go-for-broke first aria. I wanted to get to know her a bit so I tried to utter a simple compliment about her striking pink jacket. I have no idea what I said in my fevered and exhausted state, but it came out somewhere between idiotic and mildly offensive. Thank goodness she was too focused on her audition to notice as I tried to dig myself out of the conversational ditch.

Before we allow our friend Figaro to take the stage in his classy new Filene Center set, there are lots of numbers to crunch.

We’ve been renting productions for our large venue for over 25 years. On one level it makes a lot of sense. We only do 2 performances in this venue, our small scene shop and staff simply can’t build a production to fit on a 75-foot wide stage, and common sense should dictate that renting would be most cost-effective.

But in recent years we’ve had increasing trouble finding new productions of standard repertoire (go here if you want to know why it’s only standard rep) that fit our stage (second largest in the country), are available for rent, and don’t have technical requirements that will break the bank ( raked stage being one of them).

Our theatre is multi-use, to put it midly. About 100 performances in about as many days every summer – pop/rock, jazz/blues, musical theatre, dance, symphony, world music. The crew does seem to enjoy it when the opera company’s in the theatre, because they get the chance to produce instead of present. But it’s still very expensive to get a non-opera house ready to accept a full opera production, then to wedge in a pop show on our pre-performance dark day so the singers can get a day of rest and we don’t lose critical income.

In very general terms, over 60% of our scenic budget has been used to transport, load in, build, run, strike, re-set, strike again, and load out rental sets. Largely because the rental productions were, of course, not developed with our specific, dare I say, peculiar requirements in mind. And it costs a lot to make them function in our theatre.

So we’re turning the tables. Putting at least 60% of our budget into designing and constructing a production that conforms to the assets and liabilities of our theatre, so that we can keep the load/build/set/strike costs to a minimum. Elegant in theory, tricky in application. We’ll keep you informed.

Next discussion: amplification. Be afraid.