Winter’s last gasp brought our red-tailed hawk back to his perch outside my office window. I like to think he’s waiting for the return of Volpone and its hawkish characters Corvina (the Crow) and Cornaccio (the Raven). 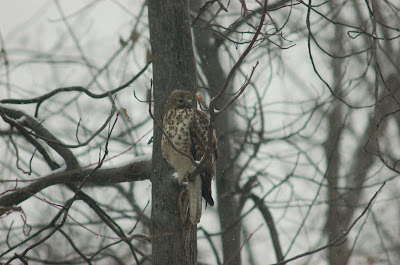 Tickets on sale today for this summer’s performances! Start here.

The Wolf Trap Opera Studio is off and running. Josh Winograde (an alum of the WTOC and the boss of the inaugural year of the Studio) was here with us all week, and we made offers to 14 singers, all of which were accepted.

Listening to the studio auditions was a change from the status quo, and an ultimately refreshing one. It was a different kind of challenge – even more about recognizing potential than our “regular” auditions. When we choose our Filene Young Artist roster, we’re looking for career potential, but we expect most of the big skill areas (vocal technique, language, style, deportment) to be almost fully formed. One can’t and shouldn’t expect that of a 21-year-old.

For those of you who are interested in such things, here are some demographic stats:

Academic affiliations ( one singer from each school except as noted)

Great news from the March edition of Opera News. I was on staff here in the mid-90’s when Emily Pulley sang Cleopatra and Fiordiligi at The Barns. She’s a salt-of-the-earth lady with a heart of gold and her feet firmly planted on the ground.

Thinking of Emily and that Cosi production reminds me of one of those performances when my life flashed before my eyes. I was playing the harpsichord, and she and her colleagues were singing the recitative that leads into the Act I Trio. Someone jumped ahead a couple of lines. No problem. Modulate quick like a bunny and catch up to them. Then a few lines later, someone decided to loop back and pick up the lines that were missed. OK…. But then of course, when we re-arrived at the lines that had already been sung (following this?), the decision was made to skip over them. Landing us mere seconds away from a cadence that absolutely had to be in E major, or we would’ve crash-landed in E Major.

It was one of those 20-second moments that play out in slow motion. I must’ve sounded like I was playing some godforsaken 12-tone arrangement of a Mozart recitative. Perhaps that’s why I enjoy Instant Opera so much :)

Today was one of those days… struggling with a DVD work sample for a grant application and feeling fogged-in and disconnected. I’m more than a little tired and stupid, so I’ll stop here. Off to tonight’s chamber music concert by the Borromeo Quartet. Scroll down for some stolen bits of humor below, if you have a few more moments to waste :)

This YouTube clip came to me through so many different channels last week that I can’t imagine that anyone hasn’t seen it yet. As someone who squared off with Rachmaninoff’s piano music in public for the very first time this year, I was particularly charmed.

How to Cook a Conductor

As Victor Borge reminded us, humor is truth. I have no idea how to attribute the recipe below. But as someone who has had to follow and mirror opera conductors from my backstage conducting post, I especially like the part about “vague, slow, circular motions.”

First, catch a Conductor. Remove the tail and horns. Carefully separate the large ego and reserve for sauce. Remove any batons, pencils (on permanent loan from the Principal Second Violin) and long articulations and discard. Remove the hearing aid and discard (it never worked anyway).

Examine your conductor carefully – many of them are mostly large intestine. If you have such a Conductor, you will have to discard it and catch another. Clean the Conductor as you would a squid, but do not separate the tentacles from the body. If you have an older Conductor, such as one from a Major Symphony Orchestra or Summer Music Festival, you may wish to tenderize by pounding the Conductor on a rock with timpani mallets or by smashing the Conductor between two large cymbals.

Next, pour 1/2 of the cask of wine into a bath tub and soak the Conductor in the wine for at least 12 hours (exceptions: British, German and some Canadian Conductors have a natural beery taste which some people like and the wine might not marry well with this flavor. Use your judgment).

When the Conductor is sufficiently marinated, remove any clothes the Conductor may be wearing and rub it all over with the garlic. Then cover your Conductor with the Crisco. using vague, slow circular motions. Take care to cover every inch of the Conductor’s body with the shortening. If this looks like fun, you can cover yourself with Crisco too, removing clothes first.

Next, take your orchestra and put as much music out as the stands will hold without falling over, and make sure that there are lots of really loud passages for everyone, big loud chords for the winds and brass, and lots and lots of tremolos for the strings. (Bruckner might be appropriate). Rehearse these passages several times, making certain that the brass and winds are always playing as loud as they can and the strings are tremolo-ing at their highest speed. This should ensure adequate flames for cooking your Conductor. If not, insist on taking every repeat and be sure to add the second repeats in really large symphonies.

Ideally, you should choose your repertoire to have as many repeats as possible, but if you have a piece with no repeats in it at all, just add some, claiming that you have seen the original, and there was an ink blot there that “looked like a repeat” to you and had obviously been missed by every other fool who had looked at this score. If taking all the repeats does not generate sufficient flames, burn the complete set of score and parts to all of the Bruckner symphonies.

When the flames have died down to a medium inferno, place your Conductor on top of your orchestra (they won’t mind as they are used to it) until it is well tanned, the hair turns back to its natural color and all of the fat has dripped out. Be careful not to overcook or your Conductor could end up tasting like stuffed ham.

Make a sauce by combining the ego, sprouts and ketchup to taste, placing it all in the blender and pureeing until smooth. If the ego is bitter, sweeten with honey to taste. Slice your Conductor as you would any turkey. Serve accompanied by the assorted yuppie food and the remaining wine with the sauce on the side.

WARNING: Due to environmental toxins present in conductor feeding areas, such as heavy metals, oily residue from intensive PR machinery manufacture, and extraordinarily high concentrations of E.coli, cryptosporidium, and other hazardous organisms associated with animal wastes, the Departments for Conductor Decimation (DCD) recommend that the consumption of conductors be limited to one per season. Overconsumption of conductors has been implicated in the epidemiology of a virulent condition known as “Bataan fever.” Symptoms of this disorder include swelling of the brain, spasms in the extremities, delusions of competence, auditory hallucinations and excessive longevity.

Bataan Fever indeed. We know it well. See you next week.