Prior to this winter, I’ve only blogged during the high-drama portions of our annual cycle – namely, the summer performing season and the autumn audition tour. The idea to continue 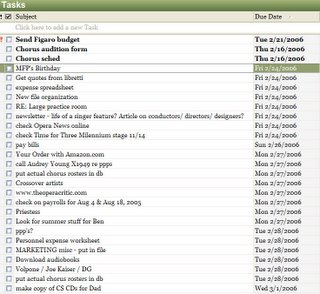 writing throughout this winter was born of a desire to provide some continuity and to demonstrate how critical the rest of our operation is. You know, that tip-of-the-iceberg thing. Folks generally have no idea how much has to happen in order for that opening night curtain to go up. (Metaphorically speaking of course… we don’t so much have a curtain most of the time.) My artistic colleagues who venture into administration invariably write me months or years later to say how, at the time they were conducting/singing/directing for us, they had absolutely no idea how labor intensive it was just to get to the first rehearsal of a production.

Anyway, somehow I’ve strayed from that intention. For two reasons, as far as I can discern.

First, I’m aware that postings are meant to be read, and it’s daunting to turn finance, donor cultivation, scheduling, negotiating, and contract generation into fascinating prose.

Second, I tend to blog at night. And frankly, by 10pm I’m tired of what I did all day and I’m looking for a diversion.

Just to prove I haven’t given up, our agenda for this week:

I jumped at the chance to buy the new CD of my colleague Mark Campbell’s Songs from an Unmade Bed. And I’ve spent the week driving back and forth to work listening to it, a middle-aged middle-class suburban mom laughing out loud in her gray minivan at a song cycle about the experiences of a single gay man in New York City.

His lyrics never fail to make me smile. No one else could smuggle Hieronymus Bosch into a song lyric so seamlessly. And I don’t know if he’ll approve, but I can see an entire generation of straight girls fighting to sing “Exit Right”.

Mark’s libretto for Volpone was a thing of wonder. Can’t tell you how much I’m looking forward to collaborating on another opera with the unbeatable team of John Musto and Mark Campbell. And every day it looks more and more as if it will happen. Any co-producers out there?

To sing
Lyrics by Mark Campbell

To fly
To soar
For once
Let go
Suspend
For a while
All you think you know
And sing
Give in
Give out
And not
Even care
What the song
Is about.

To love
The same way
To know it’s never too late in the day
To love
Just love
Surrender
To all that is brutal and tender
In love
To just love.