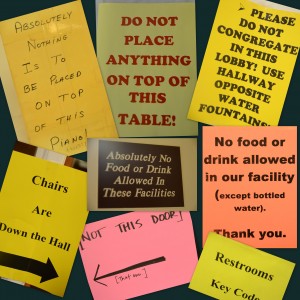 One of our Chicago audition spaces prides itself on “self-regulation.” That’s a euphemism for having a lot of signs on the walls. (this year’s haul at left)

Being surrounded by rules brings out the order-obeying conformist in me, thrusting me back to my school days. (In which I was a straight-A student, not because I was smart but because I was terrified of doing something wrong:))

So, in the spirit of rules, lists and lessons; today’s musings on Everything I Need to Know About Life I Learned On the Audition Tour:

We are exhausted but slightly giddy at the thought of returning home to Virginia tomorrow. Two more aria-filled days await us, followed by the hurried and difficult work of laying out the repertoire, schedule and casting for next summer. But the end is in sight, and there’s amazing stuff ahead.