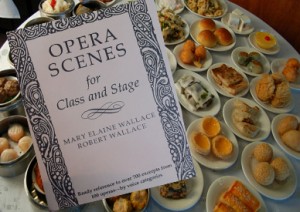 My Studio Co-Manager Grant Loehnig and I have these twelve talented Studio artists that will be spending the summer at The Trap. They serve as chorus and sometimes sing small roles in the mainstage operas. They have an educational curriculum that they follow, that includes dance classes, master classes, work with language and music coaches, and a series of seminars on the business of singing.

This curriculum also includes Studio Spotlight: a scenes program where our Studio singers get to take center stage and strut their stuff as principal artists.

From a singer’s perspective, scenes programs are invaluable; they allow young singers to “try on” some of the roles that they may inhabit in their professional lives. The programs are most often done with piano so that growing voices don’t have to compete with hordes of strings and brass; and with some set and costume pieces that represent the characters and scenes without fully fleshing them out. The singer is then tasked with completing the picture: if they’re successful, they’ll fill in those visual blanks with beautiful singing, dramatic connection, and some world-class storytelling.

But, who plans these programs? <insert evil laugh> Well, Grant and I have spent the last two months at a kind of virtual musical dim sum. We have to keep the best interests of the singers at the forefront, and we actually poll the singers to see what roles they’ve been wanting or advised to tackle. But once we have a sense of where the singer is going? After that point we have free rein to choose from the entirety of all operatic repertoire. Now, granted, we’re not likely to choose Wagner or big heavy romantic works, but that’s only because our younger singers aren’t quite ready for the vocal demands…and, while they might be able to soar gloriously over the piano, if they couldn’t realistically sing “In questa reggia” over an orchestra, we’re not likely to program it. But most everything else is fair game. Mozart? Most definitely. Monteverdi? Sure! Musto? Why the heck not? (We’ve even picked a few scenes by composers whose last names don’t start with the letter M!)

We have fairly lusty musical appetites, and narrowing down the choices is truly an exercise in discipline. If we had kept every piece that we had originally tapped for this performance it would’ve been absolutely Wagnerian in length: over three hours without an intermission, and chock-full of fantastic excerpts. But we’ve reined ourselves in, and have created an evening of diverse scenes with a little something for everyone. Romance, drama, comedy, duets and sextets, tunes in English and French and German and Italian…even pared down, it’s still a smorgasbord!

Grant and I are pretty pleased with the program, but we’re going to sleep on it in our respective Texan and Virginian homes for another night or two to make sure that it’s perfect. Only then will we let the singers in on the secret.

The program will be performed twice, on July 6 (8pm) and July 8 (3pm) at The Barns. It will be directed by Nathan Troup. And it’s an invitation-only performance: no tickets needed, but you need to be a Wolf Trap member to get on the guest list. Click here or write to us at wtoc@wolftrap.org to find out more.  We hope to see you in July for these delicious bite-sized operatic excerpts!