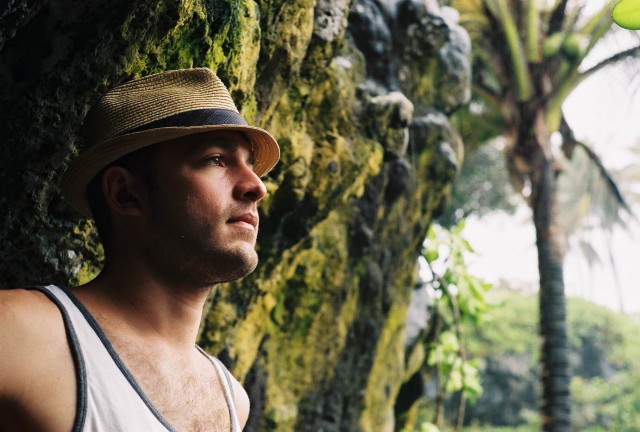 During the 2015 season, the blog will feature interviews with our Filene Young Artists. Today, we hear from bass Evan Boyer. Evan’s big role of the summer was Ramfis in Verdi’s Aida in Concert, and we are enjoying luxury casting in Butterfly as he takes the role of the Bonze!

I’m not sure I would say it was a single experience, but more a succession of events, doors opening, that brought me into this profession. Never a firm decision, “I will be a singer,” but a gradual progression into singing.

I will say that what sent me down this path was Governor’s School for the Arts in Kentucky. The summer before my senior year in high school, I applied to both the creative writing and vocal performance programs. I didn’t get into Creative Writing, which was devastating at the time (I had always thought I’d be a writer), but I did get into Vocal Performance, which had been more of an audition-on-a-whim application. That program opened up this new world, of sound and poetry and beauty and power that I’d never known existed. That was the spark. I wouldn’t say I knew then that I’d be an opera singer, but I knew I needed more of it in my life.

I don’t have a story, but I’ve spent a lot of time over the past five years thinking about what this thing, opera, is about for me. What makes it interesting, what do I respond to. The answer boils down to two things: truth and beauty. For me, all things stem from this. To be honest and sing beautifully, it sounds simple enough, but there is an enormous amount of work and effort that go into those two things.

I am also reminded of something a visiting artist said once when I was in the Ryan Center, I think it was in a masterclass: We don’t do this for ourselves. The minute we sing for ourselves, or if we fully give in to the emotion of a piece, a wall goes up between us and the audience. This is simultaneously the most selfish and the most selfless of professions. Selfish because the physical act of singing is so instantly and personally gratifying, and there is an undeniable element of ego in getting up in front of three thousand people and baring your soul. But selfless because nothing we do onstage can be done for the benefit of ourselves–it is our job to convey the score to the audience. I don’t mean to say that all we do must be for the benefit of the audience, that would be pandering, but it must also not be done solely to feed something in ourselves. All we can truly hope to do at the end of the day is truthfully and beautifully represent what is in the score. And if a performance is honest and beautiful, it will satisfy both the artist and the audience.

Anything folksy, melancholic, and acoustic. I’m a big fan of Damien Rice, The Lumineers, Fleet Foxes, and Edward Sharpe and the Magnetic Zeros. Growing up, I was majorly into hip-hop, but that turned out to be a passing phase.

It’s easy to perceive Ramfis as the bad guy in the show. But I don’t think that’s the case. All of what he does is for the betterment of Egypt, and is, as he sees it, the right thing to do. And I can’t say I disagree with him. Sure, he sentences Radamès to death, but when you think about it, what choice does Ramfis have? He caughtRadamès with the enemy the night before he was to be made heir to the throne. There’s no choice there, no option: he has to be tried and punished.

It could be interesting to play him as some slithering, Rasputin-like character, but I don’t think that’s who he is. I think he’s an upright, righteous man, who does what he must to maintain the empire. He is ready and able to make difficult, unpopular decisions.

This varies, for me, from show to show, and by composer. If it’s a Verdi show, it’s the first rehearsal with orchestra. Everything comes to life in that rehearsal. If it’s Mozart, it’s the staging process–figuring out who the character is, why he responds the way that he does, how he interacts with the other characters onstage.

Being away from home. I love the travel, discovering new cities and really getting to live in them (6-8 weeks in a city for an opera contract), but being gone for months at a time isn’t easy. I miss my wife and my dog!

Honestly, I’m not sure I could survive the road without the Aeropress my wife got me a year ago. Traveling as much as I do, it’s important to have a few small comforts, a few reminders of home while I’m away, and of those things I take with me wherever I go, it’s that crazy looking coffee maker that starts my day off right!

Several opera companies around the country are developing programs whose goal is to make opera relevant to their communities by actively participating in those communities. I think this work is incredibly important, not necessarily for the survival of opera, but for the cultural well-being of a city as a whole, and for the integration of an opera company into the greater cultural fabric of a city. And to allow people who have never experienced opera an opportunity to experience it in a way that is directly relevant to them, in their community, I think that is amazing.

There are some emotions that can only be adequately portrayed by opera. You can be so fully enveloped by a single moment, by the singers and orchestra and chorus, in a way I’ve never experienced anywhere other than in an opera house.

Phillip II in Don Carlo. I’m sure this is the response of almost every bass who is asked this question, but there’s a reason for that. Few roles in our repertoire can approach his psychological complexity, and that, coupled with the beauty and power of his music, makes him enormously appealing.

Dream role I can sing now: Leporello. I’ve sung it before, but he’s so human, and at the same time is a miniature monster. I’m not one of those who thinks he’s a victim of circumstance, he definitely loves his job and the various “perks” that go along with it.

Nicolai Ghiaurov is the greatest. Hands down. I wrote earlier about truth and beauty in singing, and for basses, for me, he is the epitome of this. The beauty of the voice, the line, and the connection to text–it’s pure artistry, always. He is such an elegant singer, and has access to such a great variety of color without ever sacrificing the sheer beauty of tone.

Ferruccio Furlanetto is someone I respect enormously. The pathos he brings to his characters is unparalleled. On stage he exudes this world-weary elegance that is amazing to watch. He is a true singing actor.

You know, I think this would take away some of the mystery. I think Verdi wrote some of the greatest music in existence, and I enjoy reading his letters, but I think in actually meeting him, or any great composer, he would lose some of his aura.

Aida. For me, there is nothing more viscerally satisfying than Verdi’s music. The scene in the Temple of Vulcan, which ends Act I, is incredibly powerful.