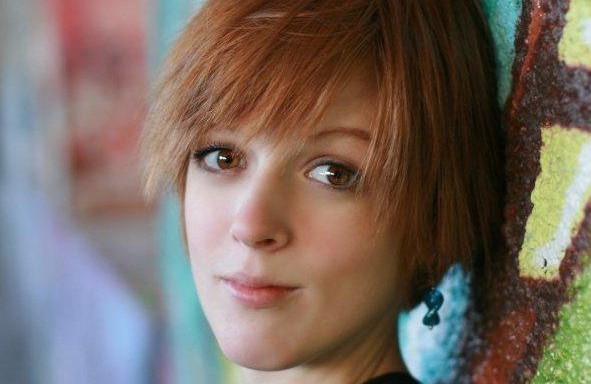 During the 2015 season, the blog will feature interviews with our Filene Young Artists. Today, we hear from mezzo-soprano Abigail Levis, Cherubino in both Figaro and Ghosts of Versailles. Abi will also perform with Steven Blier in our August Rodgers Family concert.

I was very active in music and drama clubs when I was in high school, but when I was a junior I did a concert with the community theater group that my voice teacher ran. We did some musical theater scenes and solos and after the concert she confided in me that she felt I had been the strongest performer of the night, even though I had been the youngest and greenest. She told me she thought I could make a living as a performer “not millions, but a living.” We decided then to apply to performance programs.

I was singing “The Alto’s Lament” by Goldrich and Heissler at a summer concert in a Park. The song is a lot of fun but pretty ridiculous, not something to which  I expect people to have emotional reactions.

After the performance a man came up an asked if he could “bother” me for a minute. He told me he had had a really rough year – a bad divorce that he didn’t want and a bloody custody battle over the kids he adored. He wanted to thank me for making him laugh. He said he hadn’t smiled like that in a long time and my goofy song allowed him a chance to enjoy himself for a few minutes.

That is the best compliment I have ever received and it taught me that comedy is just as powerful as raw emotion.

I was interested in a lot of things and still am. I likely would have become a high school teacher in Math or History or an advocate for troubled kids of that age. I’ve always liked teaching and there is something about high school aged kids that I find entertaining and endearing. I am also fascinated by gender studies and would love to see where that sort of college major could take me.

My parents raised me on Motown, 60’s folk, and crooners like Sarah Vaughn and Frank Sinatra. Both of my sisters are much older than me as well, so I grew up listening to their music. A few of my favorites are Three Dog Night, Queen, Joan Baez, Michael Jackson, and Whitney Houston. There are many, many more.

Well…I’m playing a pubescent boy….sooooo….I’ve mostly discovered that I am beyond thankful that I am not not have ever been a pubescent boy. I do connect with Cherubino’s hopeless romanticism though. He is very devoted to the people he cares about and he, like myself, is unabashedly fascinated by love.

There are few things I love more than a good old fashioned Sitzprobe.

Ugh. I love to travel, and that aspect of being an opera singer is one of my favorites. The down side of traveling so much is the strain it puts on personal relationships. Anyone who travels for a living can tell you how hard it is to maintain the social parts of their lives.

It’s always discouraging to watch companies fail, and we’ve seen a lot of that in or industry lately. However, I think there is a positive way of looking at it. When the company gets too big, it falls down – but the bricks are still there, the energy and materials and the need for culture remains. So one bug company disappears and three more little ones pop up in its place. I think some of the most interesting art is happening small theaters or lofts in Brooklyn or in recitals at abandoned churches.

Sex, murder, and intrigue – and that’s just in Tosca. Seriously, how could you not LOVE this stuff? Honestly though, I find that it helps to explain that people usually are more acquainted with operatic stories than they thought: Moulin Rouge, Miss Saigon, Rent – all of these are based on operas.

I’m going to go with Ottavia from Monteverdi’s L’incoronazione di Poppea. I have actually already performed this role, but I feel as though I still have a lot to learn from her. I really love singing Monteverdi because of the freedom of interpretation. You can make dramatically different choices each time you perform the music and just see where that particular choice takes you today. It’s exhilarating.

So I’m sure you meant classical heroes, but I’m going to go ahead and say Dolly Parton. What a cool woman. She is absolutely fearless in her artistry. She does what she wants with style and class and never apologizes to anyone for who she is. She also stands up for what she believes in and uses her art to help those causes. Classically, I have always loved Anne Sofie von Otter, Lorraine Hunt Lieberson, and Dawn Upshaw.

(Can I travel to the present and just meet Dolly Parton? How about to the 60’s to meet young Dolly Parton?)  I’d meet Mozart because I think he had a brilliant sense of humor coupled with a real understanding and love of humanity. I’d share a beer or three with him =)

Performing with old friends and new. Revisiting Mozart’s Cherubino for the third time and getting to know Corigliano’s for the first. The performance with Steven Blier.