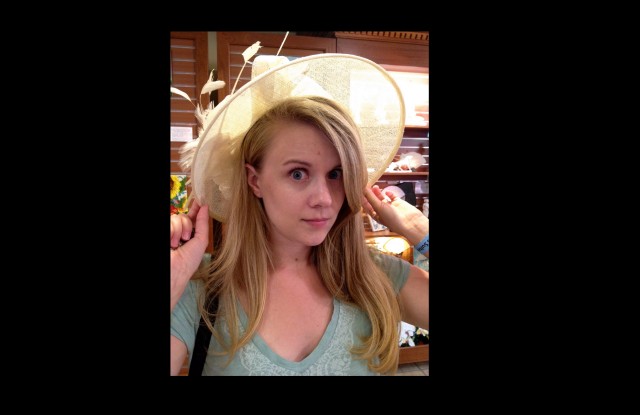 During the 2015 season, the blog will feature interviews with our Filene Young Artists. Today, we hear from mezzo-soprano Sarah Larsen, Susanna in The Ghosts of Versailles.

My mother is a fantastic coloratura soprano, and I’ve heard her singing since before I can remember, so I’ve been exposed to classical music for a long time. However, like any daughter, there was no way I wanted to do what my mother did!

I loved musical theater, and performed in the chorus of the musicals in middle and high school. I auditioned for the role of the Baroness in The Sound of Music my senior year of high school, because she got all the fun songs and awesome dresses. Instead of the Baroness, I was given the role of the Mother Abbess. I was not amused, because the Mother Abbess was not a glamorous character, but I was told that they needed me to do it because my voice was “really loud.” It was while singing “Climb Ev’ry Mountain” on the opening night, surrounded by a bunch of adolescent nuns holding candles, that I thought to myself – “This is pretty cool!” I totally messed up my words, but it was a really special experience.

I was having trouble memorizing the French translations for Charlotte in Werther, and in an effort to drill it into our brains, my friend, roommate colleague Andrew Stenson (who was playing Werther) and I would speak-sing a literal translation of the scenes we were staging that particular day on our walk to rehearsal. We did exact literal translations, because we knew if we didn’t know exactly what each word meant we would get in major trouble! We sounded ridiculous – “ Yes, Werther! The flower is of my youth in the bed of mea-a-a-a-a-dow! Ala-a-a-s!” – but we knew what every word meant! I now do that with everything that I sing that isn’t in English – even going so far as to really sing it with my terrible literal translation. It sounds super funny, but it works really well!

I would have been a dramaturg! I am a giant nerd, and researching the world of a piece is my favorite part of the preparation process. A dramaturge is responsible for knowing everything possible about the world in which an opera is performed, and the world in which it was written – for both the music and libretto. There are thousands of clues hidden in dusty library shelves that can offer us glimpses into how a character would move, act and think. I like to think of it as a puzzle. :)

I like a lot of different music, but I don’t listen to music often because it gets me so excited! If I listen to one song, then it reminds me of another and before I know it, I go on a three hour music binge! I listen to a lot of NPR podcasts in the car, but music is too distracting for me – I always end up speeding!

I am so happy that Susanna is a mezzo in The Ghosts of Versailles! Finally! She is the type of character that I think of as a “go getter.” She’s down to earth, and thus doesn’t need to sing high notes! :)

I love researching the source material and common performance practices. I find highlighting a fresh score to be extremely gratifying, and I go pretty crazy with my highlighters and colored pencils. I found early on that if I didn’t color something in my score, I wouldn’t ever remember to do it – notes, time signatures, dynamics and tempo changes!

Rehearsals are where I have the best time – there is something about so many different kinds of people coming together to make something that is so infectious! I think I am my most calm in the wings of the theater. There is this slightly cold excitement that is constantly buzzing around backstage…a balance between focus and chaos!

My colleagues told me over and over how challenging it is to be away from your loved ones, but I had no idea the extent of the loneliness when I’m away on a gig until these past couple of years. Success comes at a price, and is never easy on relationships.

I fly with a “Humidiflyer,” which is a plane-safe humidifier. Recycled, pressurized plane air is death to singers! Mucinex and Alkalol are products that have saved me more times than I can count when I think I’m getting sick. If I’m singing a lot or singing while sick, I’ll make homemade ginger and turmeric tea if I have access to a kitchen, in order to fight inflammation. If I’m dealing with a cough, I’ll throw in some fresh thyme and sage for a natural cough suppressant – I end up feeing like a witch making a potion! I try not to use cough drops, but when I need to I swear by the Luden’s Black Licorice!

I think it is fantastic that the opera world is also expanding to produce some of the classic musicals – like Showboat and Carousel. These are complex shows that can showcase operatic talent, while at the same time embracing a new audience. The music also happens to be FANTASTIC!

While I think the Debbie Voight “Little black dress” scandal served as a wake up call to the opera community, it has started to go in a dangerous direction. We should be healthy performers and individuals, but in some instances it seems that a “super model” appearance ends up being more important than actual vocal talent. I think these two things should go hand in hand – we should all try to be healthy people and should try to sing healthfully as well.

I always try to tell people that opera is relatable because all it is is realization of emotions. As fantastical certain characters in an opera can seem, they are just like you and I in that they have real emotions. We can find ourselves in these stories, because we’ve also experienced heartbreak, elation, compassion and anger. It’s actually a pretty basic art form, when you can see through the “high brow” reputation.

This is always been a challenging question for me. Since I’m a mezzo I’m almost certainly obliged to answer with “Carmen.” My dream role is whatever role I am performing – however unforgiving or grand – as long as I have colleagues working with me whom I respect. It is those relationships that let us play and suffer on stage. If I don’t respect or can’t trust the people I am working with, I’m not going to be able to focus, and I wouldn’t call that type of experience a dream. I would love to return to the roles of Suzuki (Madama Butterfly) and Charlotte (Werther,) mostly because of the memories I made working with smart and giving people.

Christa Ludwig is one of my favorite mezzos. While a fantastic singer and artist, she went through a lot of ups and downs, both personally and professionally while she was singing. Her story made me realize that no one’s career path is the same, and that there is merit to winning the marathon, not just the race.

I can confidently say that Wolf Trap has the most enjoyable and efficient work environment I’ve ever experienced. It is a place where you can experiment, make mistakes, and play, and feel comfortable taking risks. Work doesn’t feel like work there. It really does feel like I’m coming home.