We were in War Memorial’s chorus rehearsal room for yesterday’s auditions. First time in a long time we’ve actually held them in the opera house, and it was great to be there. Good friends rehearsing for Boheme down the hall and a matinee of Elixir down on the stage.

Next year we’ll have to think about trying to squeeze Studio auditions into San Francisco if we can get the space and time. (This year we only held Filene Young Artist auditions here.) Several dedicated and talented students from San Francisco conservatory had to make the trip to LA on Saturday for Studio auditions, and I’m sure it would’ve been nice for them to be able to sing for us while we’re on their own turf.

I don’t have too many ovservations on the SF chapter of auditions, but I had one blog post comment scribbled in the margins: Strength vs. Versatility. 24 hours later, I know what I meant, but I can’t remember exactly what triggered it. It doesn’t have to be a battle. One can be versatile and strong at the same time. But in young singers, one camp is often making way for the other.

Scenario S: Rep list is all the same. Filled with all tragic, lyric arias; or comprising only perky soubrette types; or all declamation and no introspection. But the artist in question does this particular type of singing quite well. It clearly speaks to his/her vocal strengths and temperament. Unfortunately, it leaves us wondering a bit about whether there are enough roles in that little subset of the Fach on which to build a career. One typical manifestation: a high lyric mezzo with no coloratura.

Scenario V: Trying to be all things to all people; to cover all of the compulsories. Big legato, fiery coloratura, wit, pathos, and declamation. No surprise, but few people do all of this well. Especially when they’ve only been singing for half a dozen years. Most of those who spread themselves so thin do not represent themselves particularly well. The negative way of looking at this is the now-old adage that we wrongly expect American singers to do everything well. The more charitable view is that singers beginning their careers should not cavalierly limit themselves to such a tiny handful of assets that they can’t make a living.

There is no answer, of course. There’s just a constant striving to reconcile these two opposing forces. Some wisdom may lie in fighting your natural instincts. If you are tunnel-visioned by nature, make a conscious effort to operate thoughtfully outside your comfort zone. If you are eclectic and inclusive by nature, spend some serious time considering your biggest strengths and how to play to them without excluding everything else.

My other thoughts from our California weekend are broader, stemming from the bad news that’s now hitting our business, and from my recent conversations with colleagues and friends. But those ruminations need to distill just a bit more. For now, it’s back east, to Ohio. See you from the University of Cincinnati College-Conservatory of Music on Wednesday. 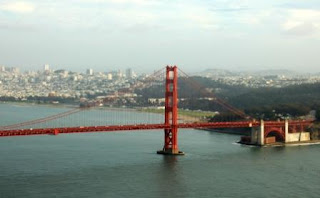 A shout-out to MikeBee for being the best SF tour guide ever!

PS – I’m 3 for 3, running my sad little 2K in this year’s audition tour cities. Thanks to Rahree for somehow knowing which streets to turn down so that almost the entire run included no uphill climbs! Ohio will be tough, given that we’re only there for 25 hours. Not giving up yet, though.