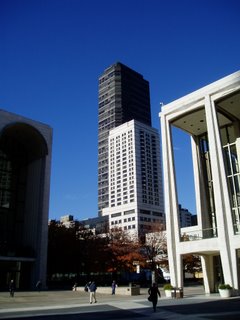 An absolutely beautiful day in New York, the second in a row. Makes up for those 18 solid hours of pelting rain on Wednesday. We relocated today, to the 10th floor of the Rose Building at Juilliard (white tower at left).

“Caro nome” – That first E-natural (“Gualtier Maldé!”) has to be on pitch and gorgeously spun. It takes us a long time to recover from a sketchy first impression if that first phrase (which is all about the E-natural) is tough going. If you sang “Caro nome” for us today, please don’t read anything into this. As a matter of fact, today’s rendition was particularly lovely. It just reminded me of all the times a soprano had to recover from that first deceptively difficult phrase.

Mezzos – Consider “This Journey” from Dead Man Walking. I continue to be desperate for an alternative to “Must the Winter Come So Soon.”

It’s the Return of Pamina! After an endless succession of “Ach, ich fühl’s” last year, the sopranos are dealing with Pamina sparely this year. These things go in cycles anyway. We heard our first one today, after almost four solid days.

I received the following email today (duplicated here with the singer’s permission) in response to yesterday’s blog entry:

Before I begin this email, let me first say that I’ve never blogged, not once, NEVER!!!…(what, never???) That being said, I looked to your blog in regards to the auditions of my particular day only to find myself being the indirect (and, thankfully, nameless) subject of what you considered a tasteless and crude gesture…crotch grabbing. First of all, let me apologize to you if it was offensive. Please allow me just a moment to defend the action, seeing as the PRECISE response that I sought was the one that you had. For the sake of clarity , I made the choice to grab myself when Belcore was stating “son galante e son sargente” (please excuse the spelling). What kind of a pompous jackass would at the same time be blowing his own horn about being gallant and grabbing himself???!!! I think Belcore IS that jackass. While there are many other ways to show this, there are perhaps none quite so poignant. I realize that it walks a border of bad taste, but if we really look at the humor of the period we have to realize that Donizetti was not writing for the crown, but rather the commoners, and one has to associate slapstick,”crotch humor”,and “potty humor” (that is if potty and crotch humor can’t be categorically linked!) with the comedic zeitgeist of Italy in 1832.
P.S. I eagerly anticipate a retort!

I’m not sure I was up to a retort, but here’s my response:

Thanks for your explanation. Your description of the character and the situation shows (as I fully expected) that you have given a lot of detailed thought to your interpretation. Trust me; I was not offended. (If I were that easily put off, I wouldn’t have lasted very long in this business!)

I buy into your rationale, and I whole-heartedly agree with the statement that L’elisir is not particularly high-minded. I can easily envision a production into which this particular Belcore fits perfectly. The reasons that I mentioned the gesture in the context of our audition tour are two-fold:

1) It was far enough outside of the panoply of what we usually see in an audition situation to distract our attention for a while. Now perhaps the audition experience shouldn’t be that artificial – I won’t argue that. But I’m looking primarily to see and hear what a singer can bring to an aria outside of a full-fledged staging format. Not everyone agrees. And this general dilemma (blocked? staged? physically rooted? traveling?) is very much on singers’ minds. I get asked this question a lot. And there is no single answer. All I know is that when something happens visually that’s far enough outside of normal parameters for this very abnormal performance situation called an audition, it catches my attention and detracts from my appreciation of the overall picture. If that’s as hard to understand as it is for me to explain, I apologize.
2) I might not have remarked about it at all except that we had a female singer make pretty much the same gesture this week.

Thank you for your audition and for the obvious way that you are deeply committed to being a singing actor. If there’s any portion of your email and my reply that you’d agree for me to publish on the blog (your name omitted), let me know. Otherwise, it’s just entre nous.

To “stage” or not? To what extent to incorporate blocking into auditions? Should you feel as if you’re straitjacketed? These questions are asked frequently, and each one of us has our own answer. Personally, I want you to feel free up there, but I’d rather let the voice, the language, and your nonspecific body language (what is that? you say…) do the work. But clearly, with the more buffo material, there’s a larger gray area.

Thoughts? Feel free to enter the fray. Comment below or wtoc@wolftrap.org.