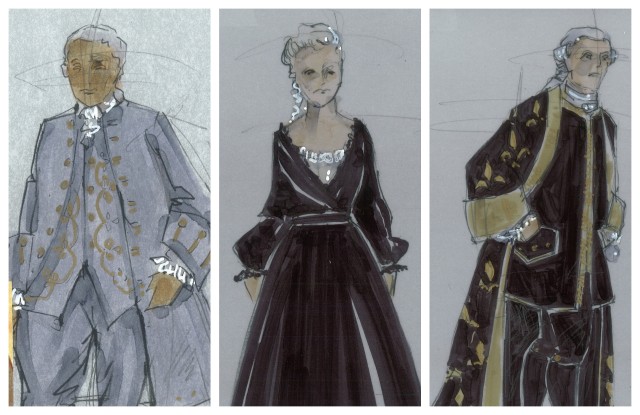 Today, the first in a series of short posts that will get you ready for The Ghosts of Versailles, a few easily digestible paragraphs at a time.

The “Ghosts” of the title include Marie Antoinette, her husband King Louis XVI of France, and several of their aristocratic friends. The writer/musician Beaumarchais* – another ghost – is in love with Marie Antoinette, and he is convinced that he can roll back time and rewrite history so that she is never beheaded during the French Revolution. (Above: Designer David Woolard’s costume sketches for these three characters)

How does Beaumarchais do it? With a necklace.

“I, Pierre-Augustin Caron de Beaumarchais, will change the course of history with a necklace.” (Prologue: The Ghosts of Versailles)

Beaumarchais uses as his strategy an actual historical incident often called The Affair of the Diamond Necklace. (Click through if you have the time and desire. Not necessary, though. I promised this would be easy.)

Basically, Marie Antoinette was framed and implicated in a complicated scheme involving an expensive necklace. The details don’t matter so much as the fact that this affair is often considered a turning point in the public’s incitement to riot, revolution, and eventual beheading of the King and Queen. Beaumarchais believes that if he can intercept the whole necklace debacle, the Queen’s life will be saved.

So now you know who the Ghosts are, and what Beaumarchais would like to do. Tomorrow we discuss how. And it involves your old friend Figaro :)

* If the name Beaumarchais sounds familiar, it’s because you’ve been studying your music history. Beaumarchais wrote two plays that were transformed into popular operas: Mozart’s The Marriage of Figaro and Rossini’s The Barber of Seville.